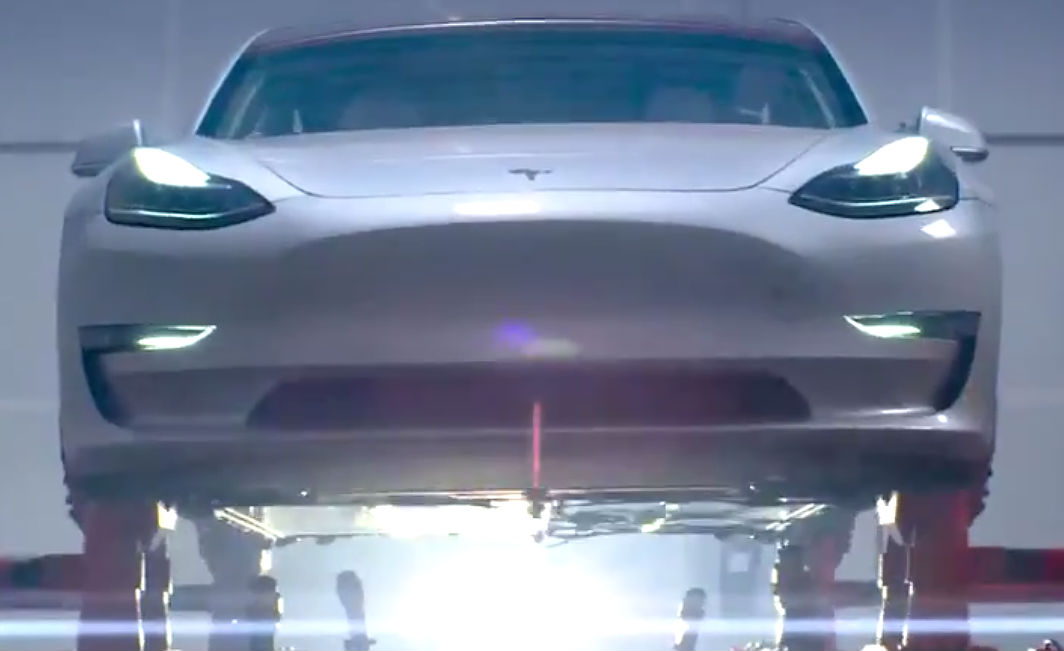 Amidst the company’s continued push for the Model 3, Tesla has shared a video of the electric car being subjected to a road simulator, a machine that is usually utilized to test the durability of a vehicle and evaluate a car’s ride quality.

The machine being used by Tesla on the Model 3 appears to be a 4-poster automotive test system, which consists of four hydraulic actuators, on top of which the wheels of a car is placed. As could be seen in Tesla’s brief clip of the Model 3, the movements of the actuators simulate road surfaces and forces exerted by the road on the vehicle’s wheels. Apart from simulating road surfaces, 4-poster automotive test systems are also used to test production vehicles for squeaks and rattles, as well as to ensure that a car has no loose parts. The system is used to evaluate noise vibrations and harshness, as well as ride comfort.

Tesla’s recently uploaded video of the Model 3 being tested by a road simulator comes amidst the company’s ongoing push for the vehicle. After anti-selling the Model 3 until most of the second quarter, Tesla has assertively promoted the car over the past couple of months. Even Tesla CEO Elon Musk, who was quite active in anti-selling the Model 3 before the vehicle entered production, changed gears this quarter, promoting the car on his Twitter page.

This became particularly prominent as the company was preparing the rollout of the Model 3 Performance back in July. In a post on Twitter, for example, Musk called on Model 3 reservation holders to test drive the Dual Motor Performance variant even if they haven’t placed an order for the vehicle. Musk noted in his tweet that driving the Model 3 Performance is like having “pure fun jacked straight into your brain whenever you want.”

Whether you plan to buy a Dual Motor Performance Model 3 or not, take it for a test drive anyway. It’s like having pure fun jacked straight into your brain whenever you want.

Considering the company’s updates during the Q2 earnings call last month, Elon Musk’s efforts to upsell the Model 3 Performance appears to have borne fruit. While discussing the demand for the Model 3, Tesla’s worldwide head of sales Robin Ren noted that since offering the higher-end versions of the Model 3, the company has started seeing “more orders for the All-Wheel Drive Dual Motor car and performance cars combined than the rear wheel drives.”

Tesla is preparing for what could very well be yet another record quarter for its latest and most disruptive vehicle to date. In an email to employees, Elon Musk noted that the company is “about to have the most amazing quarter in (its) history, building and delivering more than twice as many cars as (it) did last quarter.” Considering that Tesla delivered a total of 40,740 vehicles in Q2 2018, of which 18,440 were Model 3, 10,930 were Model S, and 11,370 were Model X, the company’s numbers this Q3 would most likely be record-breaking indeed.