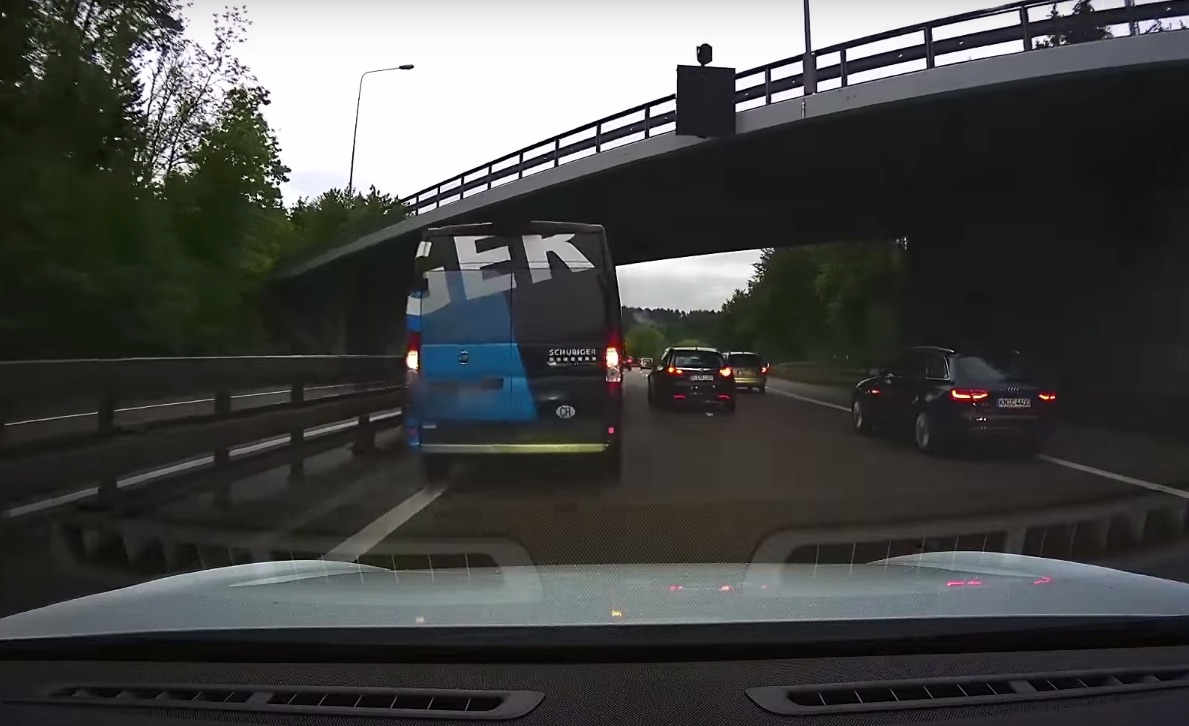 A Tesla Model S crashes into the back of a stalled vehicle on a highway. Who is responsible, Autopilot, TACC, or the driver? Ultimately, we know the answer but not everyone wants to admit it.

A Tesla Model S on Autopilot crashed into the back of a stalled van in the high speed lane of a highway this week. The owner Chris Thomann who caught the accident through his dash cam believes it shows the Traffic Aware Cruise Control/Autopilot feature of his car malfunctioned. According to the description on Thomann’s YouTube video, he claims Autopilot and TACC have worked flawlessly many times before, but this time “The forward collision warning turned on way too late, it was set to normal warning distance”.

Updated: The original YouTube video has been marked as private so we added this animated gif via CNET showing the events of what happened.

There have been several instances lately in which Tesla drivers claim their cars malfunctioned, leading to collisions. Is there something wrong with these systems that people should be aware of?

The answer appears to be “No.” On Reddit, Tesla owner Ricodic took the time to post this language from page 69 of the Model S owner’s manual:

Warning: Traffic-Aware Cruise Control can not detect all objects and may not brake/decelerate for stationary vehicles, especially in situations when you are driving over 50 mph (80 km/h) and a vehicle you are following moves out of your driving path and a stationary vehicle or object, bicycle, or pedestrian is in front of you instead. Always pay attention to the road ahead and stay prepared to take immediate corrective action. Depending on Traffic-Aware Cruise Control to avoid a collision can result in serious injury or death. In addition, Traffic-Aware Cruise Control may react to vehicles or objects that either do not exist or are not in the lane of travel, causing Model S to slow down unnecessarily or inappropriately.

The problem is not with the software, it is with human drivers. It’s not that we don’t trust the technology; it’s that we trust it too much. We assume it means we can read the paper on the way to work or fall asleep at the wheel. We get lulled into a sense of false security by how well Autopilot and TACC work most of the time. The failure is in the human brain, which needs a moment or two to recognize that an emergency is in the making and that it is time to re-assert control over the vehicle.

Tesla owner Jarrod Overson spoke about this candidly in a post on Medium after his car suffered a collision in April. “Once I recognized the car was stopped in front of me, I explicitly remember panicking with the following thoughts going through my head: “Does my car see this? Is it going to do anything? NO. NO IT ISN’T. EMERGENCY.” In retrospect, the actions I needed to take were obvious . I should have regained control immediately. That half of a second or more probably would have made a lot of difference. The problem is that my brain wasn’t primed to have that conversation with itself. Now it is.”

Overson knew some would take him to task for his error in judgment. “I’m not looking forward to the comments calling me stupid for not doing this automatically, but I felt like it’s an important topic to be open about. I’d wager we all had a time in our lives where we didn’t know the extent of some technology, trusted it too far, and had to recalibrate after we understood the limits. Now we might just have to be a little bit luckier to get to that recalibration stage.”

It’s what autonomous driving experts refer to as “the handoff,” that brief period of time between when everything is going along serenely and when it is not. It’s when the computer suddenly finds itself in one of what Elon Musk calls a “corner case.” Those are instances that requires human input. Often, drivers have less than a second to react.

As good as Autopilot is — and it is getting better all the time — Tesla drivers still must be aware that the company and the software expect them to step in when necessary. Many put too much faith in the technology and are willing to abdicate ultimate responsibility for the operation of the car to machines.

The glowing praises we often hear from Elon make it easy to do. Perhaps Musk and Tesla could back their statements about the wonders they have created down a notch. Not everyone reads every page of the owner’s manual and even fewer commit everything found in the instructions to memory.