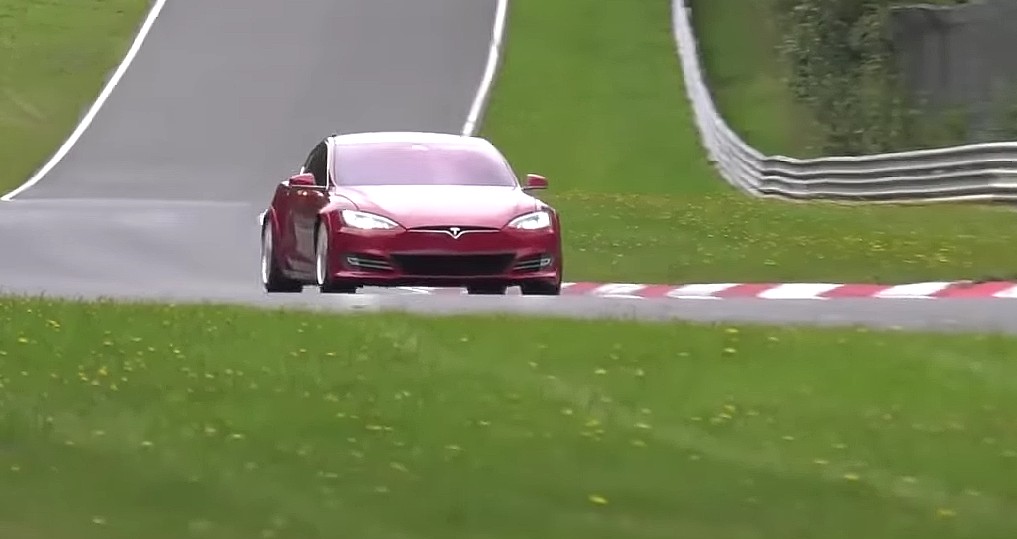 A Tesla Model S with 'Plaid Powertrain' in the Nurburgring. (Credit: autoevolution/YouTube)

The Tesla Model S “Plaid” variant that has had the electric automobile community buzzing for the past few weeks will leave the Nürburgring for the rest of September only to return in October, the Silicon Valley-based electric vehicle manufacturer stated in a recent Twitter announcement.

The company seemed to be taking a more permanent residence at the German raceway after the company shared a picture of a Supercharger charging a dark blue “Plaid” Model S on September 18. Speculation suggested that the company would continue to test through the month of September, but now it is clear that Tesla will leave for the rest of the month and return at an unspecified date in October.

Until then, auf Wiedersehen Germany 👋

Here’s some of our initial Model S Plaid data to keep you buzzing until we return: pic.twitter.com/cWk9EModcM

The company said that data showed a Model S running its “Plaid” powertrain would be capable of running the full length of the iconic racecourse in 7 minutes and 20 seconds. This is a full 22 seconds faster than the Porsche Taycan’s record of 7 minutes and 42 seconds, a time that still stands as the record at the course for a four-door production electric vehicle.

Following a statement of support for the Taycan’s accomplishments in the Nürburgring, Elon Musk tweeted that the Model S would arrive in Germany in the coming weeks for testing. Since then, photos and videos of various Model S variants have circulated throughout the electric vehicle community but it wasn’t until the seven-seated, triple-motor “Plaid” variant of the Model S hit the Laguna Seca raceway in Central California and set a track record that Musk confirmed the newly released powertrain was the one at the German track.

Reports from German media have recently circulated that the Model S has beaten the Taycan’s time by around 20 seconds, and the data released by Tesla may confirm that this is an accurate statement. But the company says that the time is not its best possible performance, and they expect to shave off an additional 15 seconds when the Model S inevitably returns to the Green Hell next month, indicating that the company will continue to refine the “Plaid” powertrain to draw even more power from the already quick vehicle.

The “Plaid” variant is scheduled to start production in the last quarter of 2020. The Tesla Roadster and Model Y are also expected to begin production in 2020.