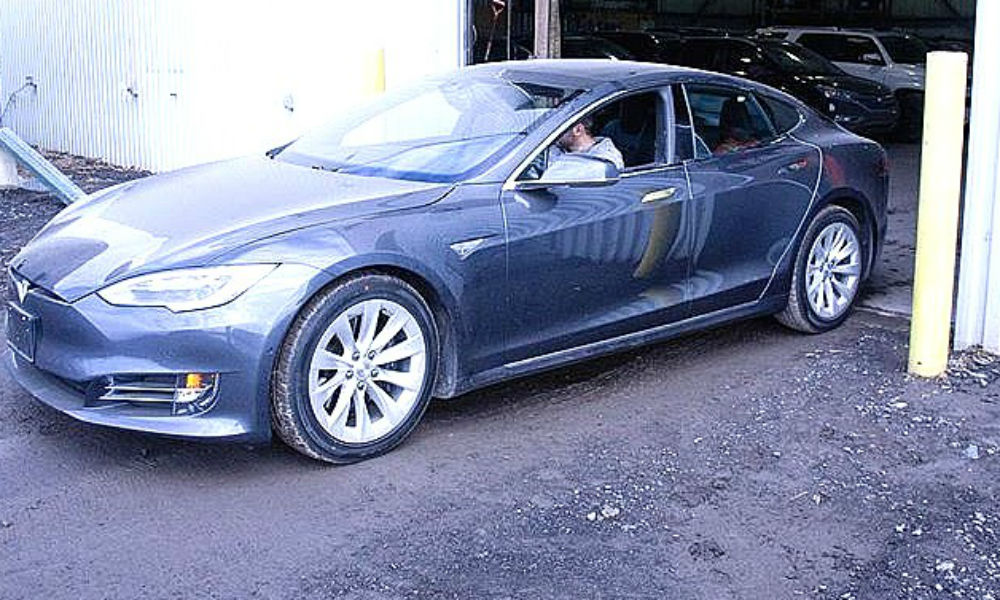 When Soby of Evoto Rentals handed the key fob of one of the company’s Tesla Model S to a client that booked and paid for the electric car in advance, the businessman did not realize that it would mark the start of a long, arduous pursuit that would take the vehicle from the shipping yards of Montreal, Canada, to the shores of Italy. With its web of intrigue, near-misses, and a dramatic rescue, the story of Evoto Rentals’ stolen Model S could very well be one of the most compelling Tesla tales that has emerged to date.

It all started with a seemingly innocent booking. The client appeared to be a regular customer that merely wished to rent a Model S for a week. Everything seemed fine when the car was being booked. The deposit went through, and the entire rental fee was paid through a credit card. The customer drove off, and the electric car rental company thought that it was business as usual.

Things started to get strange. Monitoring the Model S through GPS, the businessman was a bit surprised to see the customer parking the premium electric car at a container packing company located on the outskirts of Montreal. The car stayed in the same location for 48 hours, and then the triangle representing the vehicle turned gray. With red flags all over the situation, the businessman tried emailing and calling the client, before realizing that the email address provided was a throwaway and the mobile number was from a burner phone.

The businessman promptly reported the incident to the police, but the police explained that the circumstances were a civil matter since Evoto had rented the vehicle to the client. The police also commented that car thefts were low on their priority, so it might take a couple of months before a judge could look into the incident. Evoto Rentals would also be required to show proof that it attempted to contact the client after the rental period was over, such as physical letters sent by registered mail to the customer’s address.

The businessman opted to ring up the company’s lawyer and Tesla, both of whom advised against waiting as the vehicle could be shipped overseas. The electric car rental company hired a private investigator to scout the last known location of the vehicle, who was able to get some information about the nature of the cargo packing firm’s activities. Thanks to some help from Evoto’s lawyer, a search warrant from the police was secured, and the packing company’s site was searched.

The packing company claimed innocence, arguing that they believed the Tesla Model S was just another second-hand vehicle that was being shipped overseas. The company even provided camera footage to show the person who drove the electric car to the location. The contact information to the shipping company that was tasked to take the vehicles abroad was given as well. The shipping company was immediately called, but not long into the conversation, the businessman’s heart sank. The container that had Evoto’s Model S had just sailed towards the Middle East, and the vehicle was already in international waters.

With the pursuit of the Model S now extending far beyond Montreal, the EV rental company coordinated with the authorities to get INTERPOL involved. The ship was expected to have a layover in Italy, which presented an opportunity to retrieve the Tesla. This required some more paperwork to get the right authorities involved, as Evoto had to ask local police to make a request to the Royal Canadian Mounted Police (RCMP), who in turn created a request to INTERPOL, who, in turn, notified the Italian police to seize the ship when it arrived in the country. In a stroke of luck for Evoto, INTERPOL and the Italian police worked quickly, getting everything ready within a week.

The operation was a success, and the container carrying the stolen Model S was retrieved. As it turned out, the thieves cleverly declared that the container was filled with scrap metal so as not to arouse suspicion. When authorities opened the container, they did find scrap metal inside. But also inside the container was Evoto Rentals’ Tesla Model S, caked in dust, but miraculously undamaged from its harrowing ordeal.

After more paperwork from the electric car rental company, the Tesla Model S was finally shipped home to Canada. Not including legal fees, Evoto ended up spending about US$21,000 to get their electric car back from Italy. Fortunately, most of the costs were covered by insurance. The stolen Model S finally made it home recently, where it was welcomed by the Evoto Rentals team.

While the theft of the vehicle was an emotionally draining ordeal, the businessman was nonetheless grateful for the help that Evoto received which made it possible to retrieve the stolen electric car. The EV rental company also gave particular thanks to Tesla for the electric car maker’s help, as well as the Model S’ technologies that made it easy to trace the vehicle’s location even after it left Montreal. The businessman learned a lesson too, as Evoto Rentals now conducts background checks for its clients before handing over a vehicle. A second GPS tracking system has also been installed on the company’s fleet of Model S, Model X, and Model 3.

Teslas are among the most challenging vehicles to steal. Fank Scafidi, director of public affairs at the National Insurance Crime Bureau, which crunched data from the Federal Bureau of Investigation’s National Crime Information Center, noted that 112 out of 115 stolen Teslas have been recovered from 2011 to May of 2018. “That’s about as good as it gets. I’m wondering if the thieves’ intellect might have been overwhelmed just sitting in a Tesla, much less figuring out how to operate it for any length of time,” he said. Apart from their tech, Teslas also have a suite of security features, including those that are introduced through a software update, such as Sentry Mode.