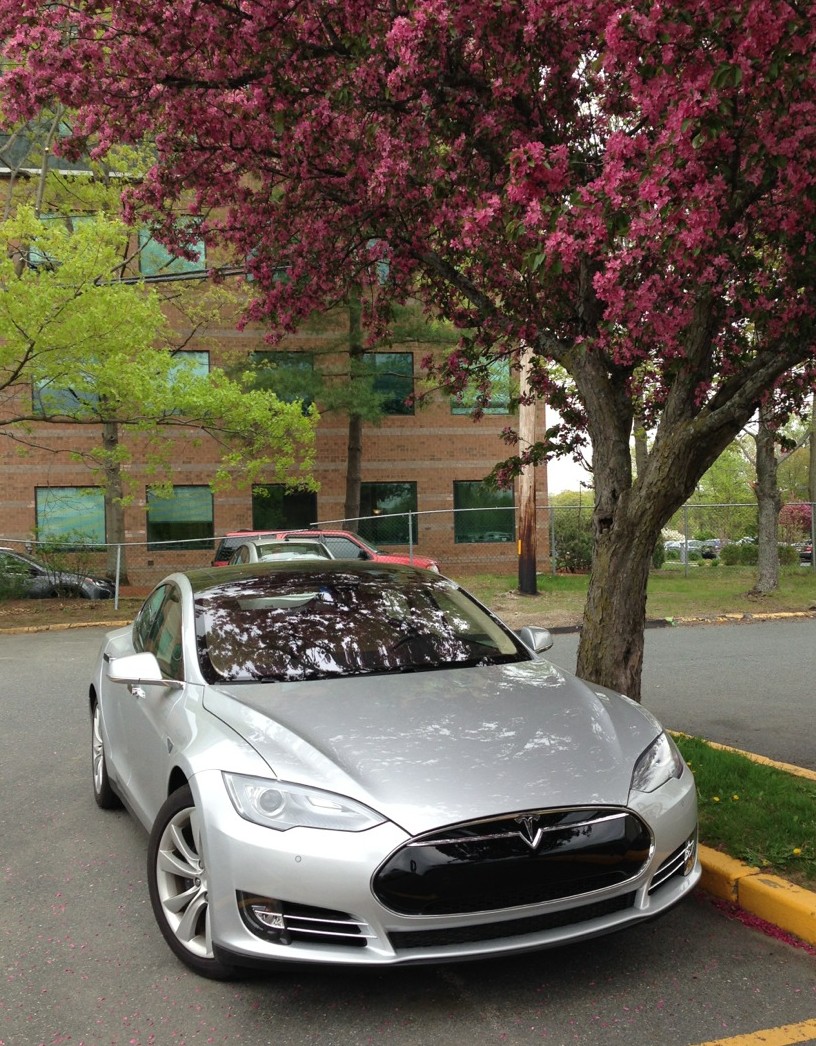 I had the opportunity to compare the Tesla Model S 60 which I received as a service loaner against my S 85. The loaner was in silver which I never even considered.  The silver color swatches in the Tesla store never looked all that great to me, however I can tell you that a silver Model S looks great in person.

I have no regrets on choosing the grey over silver but this re-enforces the fact that you should always try and see the cars in person at your local Tesla delivery center, especially if you’re on the fence between two colors.

The S60 has the smallest battery amongst the Model S line up. Right off the bat I can tell the units of measurement on the dash are a bit different than the S 85 which likely takes into account this lower capacity and differences in regenerative braking capabilities. I didn’t notice much of a performance difference between the the S60 and S85 but then again I didn’t push it too hard. The car was plenty fun to drive.

I didn’t buy the S85 for faster 0-60 times. Rather I bought it for the extended range capabilities. I think the performance of the S60 would have been perfectly fine for me had I taken that route.

A surprising character of the S60 is that its regenerative braking is much less aggressive than that of the S85 even when set in “Standard” mode. I love the way regenerative braking slows my S85 down to the point that I rarely need to use the brakes at all, but the S60 just didn’t have that same feel.

The loaner S60 was equipped with the Smart Air Suspension package which I opted not to get on my S85. The feature currently costs $2,250 USD at the time of order.

I played with raising and lowering the ride height of the car while the it was parked. The doors can not be open when you toggle through ride heights and as a result it’s a bit difficult to observe.

The changes in ride height are pretty small — just a few inches, but nonetheless it was cool to be able to raise and lower the car from the touch screen. The low setting is definitely lower than a Model S with the standard suspension.

“it was cool to be able to raise and lower the car from the touch screen.”

The high and normal setting appeared to be equivalent in height to the standard suspension, at least at a glance. While that extra bit of height may help with in situations when ground clearance is absolutely needed, I’ve never had an issue bottoming out or clearing a reasonable curb with my standard suspension. The bottoming out argument seems like a pretty invalid reason to buy this option to me.

I tried driving around with the various settings and some seemed to reset themselves after the car began moving. I didn’t get a whole lot of time to play with each setting, but you could feel the difference in ride height while driving. I can’t say that I preferred one setting over another with the time I had. I also didn’t get a chance to play with the jack mode.

MUST READ: Revealing the Most Popular Tesla Model S Configuration

The ride felt smoother on the S60 than my S85. Whether this was due to the smart air suspension or perhaps the difference in the weight is unknown to me, but I did like the way the S60 handled a bit better than my S85 with the standard suspension. After switching back to my S85 I was still very happy with its handling and didn’t miss the air suspension.

I had active suspension in my MDX and on that car it was a barely noticeable gimmick. On the Model S air suspension seems to be much more “real” but also seems to me to be less practical than other options. Also maintenance costs on active suspension options are notoriously high which was the main reason I skipped the option. The S60 was equipped with the upgraded with the Ultra High Fidelity Sound System. I’m not an audiophile by any means and other than a visible “dolby” logo on one of the screens along with an XM option for radio I couldn’t tell any difference in the sound or function. Unfortunately the XM radio (and Slacker!) in the loaner were not configured so I couldn’t try out those services. I never considered getting the better sound system and have no regets there. The standard sound system on the Model S is excellent.

The S60 also had the yacht floor installed. Depending on what decor you have the price for this can range from $650 to $850 US. I really didn’t like this at all. I found things still slid around on the yacht floor despite the rubber “rails” and the gloss black version they had installed showed all sorts of dirt/dust. Personally i’d like either a real center console or an all weather mat insert for this area. I think the yacht floor is a complete waste of money.

It was great of Tesla to lend me a car while they did the service and I really enjoyed being able to check out some extra features on my own time. I was really hoping for a loaded P85+ to review or even a Roadster but no such luck this time. Overall my impressions of the S60 loaner left me very happy with the choices I made for my own car and I was happy to get it back quickly.