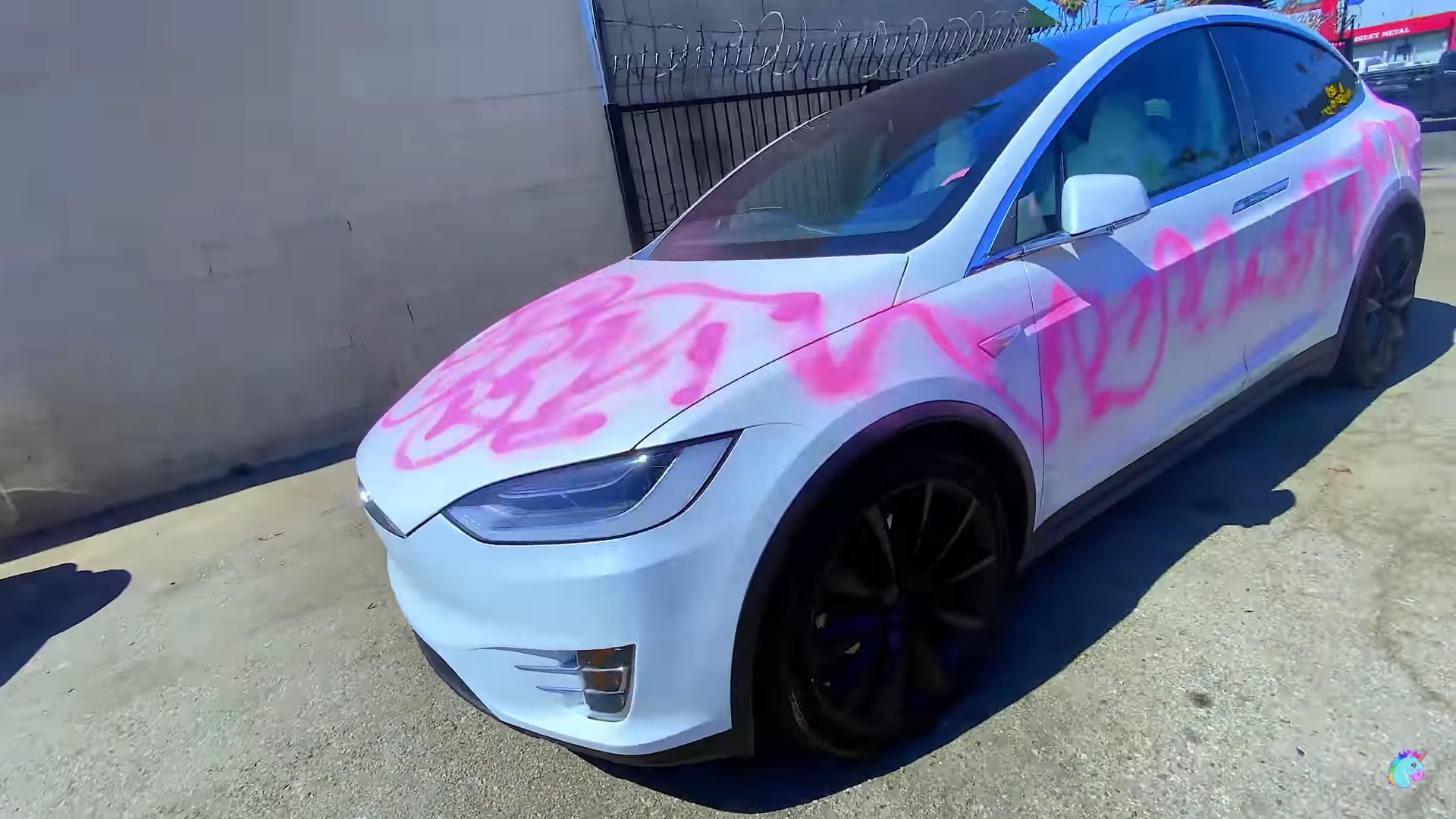 Tesla owners are known for their stylish, and sometimes flashy, custom car wraps. The flexibility and image potential the technique offers is near limitless. Is it any wonder, then, that the popular unicorn-theme trend would find its way onto one of the company’s all-electric vehicles? In a recent display of Tesla fun brought inside out, YouTubers ‘The Unicorn Family’ have literally highlighted one of the most colorful expressions of personality ever made on a Model X.

The Unicorn wrapped Model X in the Family’s latest video featured more than just a sun-catching wrap job – it also came with a plot line. Before its color was transformed, a ‘crazed fan’ used pink spray paint to vandalize the SUV’s original white paint. After a few extra touch ups from personality Baby J, the Model X was taken to Wrap It Up in Los Angeles where the custom color was added. By the looks of it, the job gave the owners a happy Hollywood ending to their saga.

In spirit of fun, which CEO Elon Musk has made a priority to include its vehicles, Tesla has embraced colorful theming of its own. For instance, clicking the vehicle charge handle button 10 times in quick succession while a Model S or Model X is locked and charging, the illuminated ring which glows when charging will begin to do a ‘rainbow dance’. Also, while using Autopilot, pulling the turn stalk four times in succession unlocks a rainbow ‘psychedelic cowbell road’ on the center screen. In a similar vein, a red-wrapped Tesla Semi joined the rainbow-filled festivities during a Pride Parade last year.

While Tesla owners generally don’t need encouragement to pursue custom wraps for their electric vehicles, the company has recently decided to make the practice an official part of its business for Made-In-China models. A post from Tesla’s Customer Service page on Weibo stated that the company was launching a custom wrap program in Beijing, Shanghai, Guangzhou, Shenzhen, Suzhou, and other cities in mid-August this year.

“Tesla is more and more common on the road, and it is getting easier to recognize the wrong car at the charging station…How to make your Tesla different and stand out? Now the Tesla Delivery Center has launched the [Color Changed Car Jacket] product, which can make the vehicle cool!” the translated company post detailed.

Other fun wraps by Tesla owners have included a Japanese preschool tiger anime transformation of a Model S and YouTuber Jojo Siwa’s Model X covered in a repeat photo of her face. A much more serious display from Tesla itself has been a US military veteran tribute highlighting the company’s veterans program. Overall, car wraps and Tesla ownership are a fun combo that look to go well together for long time yet to come.

You can see The Unicorn Family’s video showcasing ‘The Unicorn Tesla’ below: