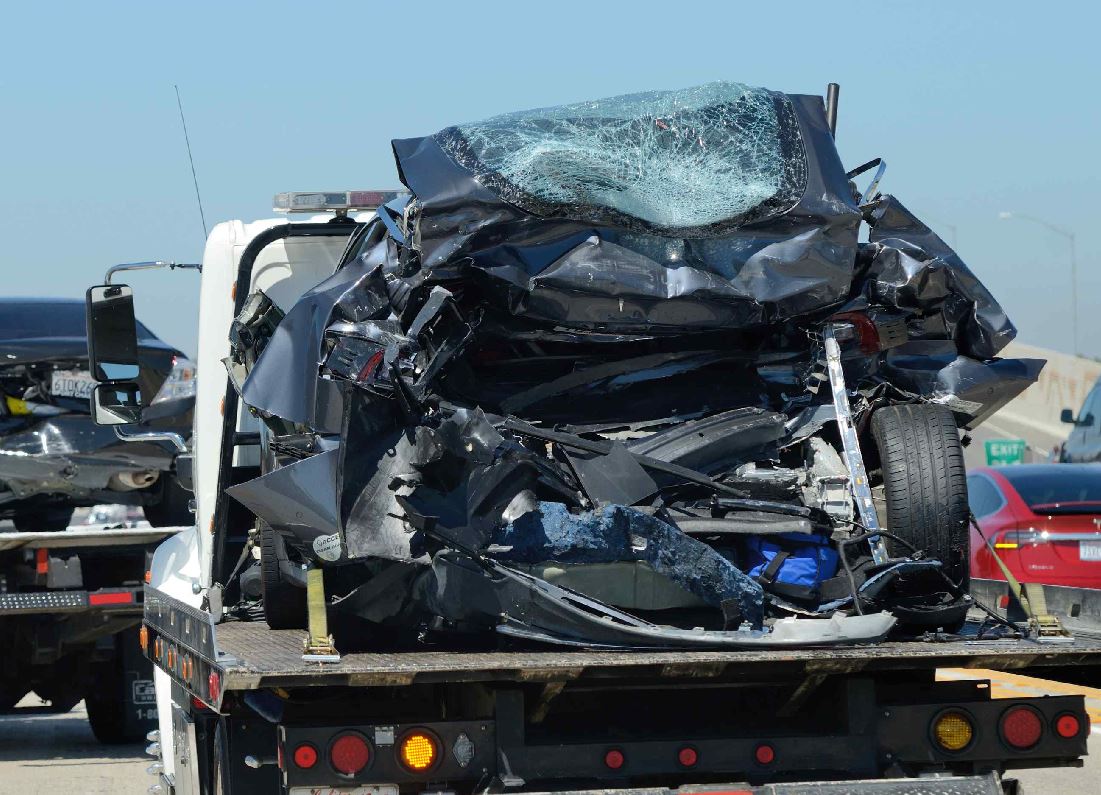 UPDATE: August 17, 2016 at 7:30 p.m.  According to the Orange County Register, Adam Kanas, the driver of the vehicle that struck a Tesla Model S Monday morning, killing one and injuring two, has been arrested for suspicion of driving under the influence and second-degree murder. He is being held in lieu of $1 million bail.

A tragic collision on the 405 freeway in southern California Monday morning resulted in the death of a 7-year girl who was riding in the rear seat of a Tesla Model S. Her 13-year-old sister sustained life-threatening injuries as well. The Tesla was hit from behind by a Chevrolet Tahoe SUV. The force of the collision destroyed the rear of the Tesla, which was pushed forward into the back of a Honda Civic.

Witnesses say the Tahoe swerved out of the left lane of the highway and into the HOV (high occupancy vehicle) lane just prior to ramming into the back of the Tesla. The driver of the Tahoe insisted on being taken to the hospital for evaluation. Police suspect alcohol may have been a factor in the accident, even though it happened at 9:15 in the morning.

The driver has now been identified as 36-year-old Adam Kanas of San Clemente. According to the San Clemente Patch, he was observed “swerving in and out of lanes” before crossing double yellow lines into the HOV lane near the Seal Beach Boulevard exit on 405 Northbound. He has been arrested and booked on suspicion of driving under the influence of alcohol. According to The Patch, an officer from the California Highway Patrol was on the lookout for a suspected drunk driver in a vehicle matching the description of Kanas’ Tahoe at the time the accident occurred.

This is not a story about someone dying in a Tesla. This is a story about why Elon Musks’s headlong rush to develop autonomous driving systems is so important. Last year in America, 32,500 people died in highway accidents. According to Mothers Against Drunk Driving, nearly one-third of those were alcohol-related. Musk believes that driving is too important to be left to mere humans, who are subject to distraction, illness, anger, alcohol, or drugs. He believes in the future, humans may be banned from driving at all, as computers and computer systems get better and more reliable.

This incident is a tragedy. The only good thing that can come from it is a heightened awareness among regulators, lawmakers, and members of the public that autonomous driving systems will save tens of thousands of lives each year.