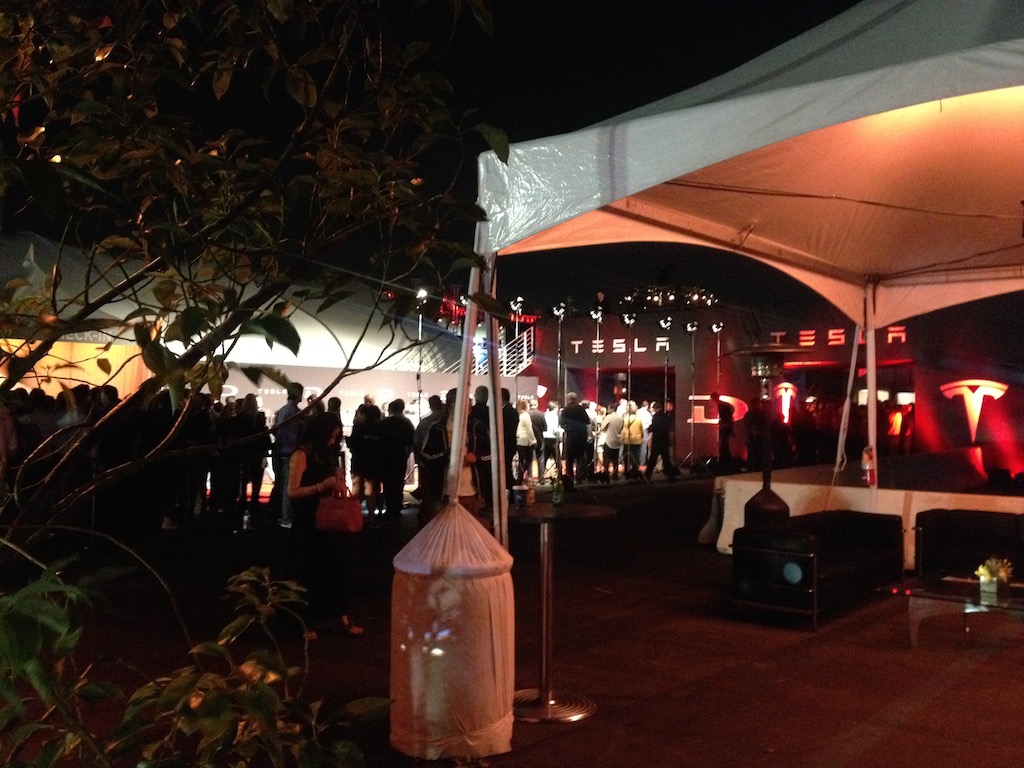 A First-hand Account of the Tesla D Event, Part 1

So, we finally saw #ElonsD and … we liked it.

The night started off young but we knew we had a long evening of journalistic duties ahead of us. Half of the team was already tweeting furiously as they approached a relatively empty Hawthorne Design Center at 5pm PST while the other half was making their way through a hellish back up of cars all looking to squeeze into a single parking entrance.

Any sort of driving etiquette that one would normally have was completely thrown out the window that night. I saw Model S after Model S making dangerous illegal U-turns right in the middle of a busy main street just to get an edge in line, but in reality it was just a silent FU to the ones that had already sat in the 1 mile back up of cars waiting to get in – me included. The sounds of EDM music heard from a distance is somehow pumping in sync with the rhythm of my  heart. I find my patience beginning to draw a direct correlation with the number of cars behind us that are seen turning out of lane only to muscle their way back into the same turn lane 1/2 mile ahead. The more cars turning out, the less my patience became. To make things worse, one of our tech guys is on the phone letting us know that the servers came to a halt after receiving an unexpected surge in worldwide traffic to our live-tweet page. The world was watching but the only thing I can think of was why Taylor Swift is playing in the background of our tech guys house. Wait …. the server, oh right.

Upgrade, upgrade, hurry!, I impatiently direct while also making sure I continue to inch forward without creating a big enough gap that would allow line-cutters to squeeze in. I wouldn’t normally do this, but having already let at least 20+ cars cut ahead, on top of the irritating beats of techno resonating throughout my cerebral cortex, I somehow felt justified to put myself into A-hole mode that night. Please forgive me.

Five minutes later, additional servers were added, Taylor Swift was still heard singing across the speaker phone and I was a happy camper again. I’m ready for #ElonsD. Tesla D event seen and heard from the freeway

So Close, Yet So Far

After 45 minutes of standstill traffic, I finally reach the gates to the parking lot entrance. A combination of frantic Tesla parking attendants and police officers guide me through a windy maze of people and cars. I make eye contact with a Tesla attendant that’s 5 feet from my windshield; he points an orange glowing baton to the right; I go right.

“OK sir, please leave your keys here,”. I eagerly step out of the car, grab the camera gear and make my way all the way back to the end of the line where another wait begins. At this point I’m just passing time reading some of Dennis’s (@dennis_p) and Sam’s (@TeslaMS60) tweets. Head down, reading tweets and walking blindly into people like a digital zombie – something I laugh at when I see others doing it, but tonight it was my turn.

I secretly curse at Sam beneath my breath after seeing that he’s already inside and helping himself to a drink. Nicolas is telling me how great of a time he’s having inside while I stare helplessly at the big D in the distance. I begin to think of all the words that begin with the letter D but can only come up with one. Repeated thoughts of cutting the line run rampant in my head. Should I pull the “I have a press pass” card (which I didn’t this time) or wait patiently like every other civilized person in line? I pulled the press pass of course. Kidding about the press pass. Another 20 or so minutes go by in line and a hysteria of people begin piling into the parking area. Some are seen biking to the event while others are walking in with entire family in tow – stroller and all. Based on the conversation I’m hearing from people in line, it seems as if most are just there for the spectacle and came by way of a +1 on someone else’s invite.

The music was getting louder and I was getting closer to the official entrance. The rhythmic sounds of EDM was actually becoming more pleasant to listen to. Maybe because I could see the sights of the red carpet ahead of me and I knew it would be just minutes before I would make my way into the holy land. What lay before me and the official entry to the event was 30ft and a check-in desk, except I didn’t need to check-in at all. Apparently Tesla was so overwhelmed by the volume of people that showed up (the official count was over 4,000 people) that they decided to just hand out wristbands to all that showed up at the check-in desk. OK, sounds good to me. I grabbed the wristband and made my way to the red carpet, pausing for a moment to decide whether I wanted to do a few gratuitous selfies along the Tesla D backdrop, or take the less glamorous path to the right.

In my head, I had already put away all sense of humility and pictured myself doing the robot, a flying jump kick and giving two tickets to the gun show on the red carpet, but I knew that would likely scare the attendees, or at the very least, make Tesla staff question my sanity and deny my entry. I walked to the right and made my way into the event.

After an hour and a half wait, I was finally in but what happened next was something I would have never imagined take place. See Part 2

A First-hand Account of the Tesla D Event, Part 1