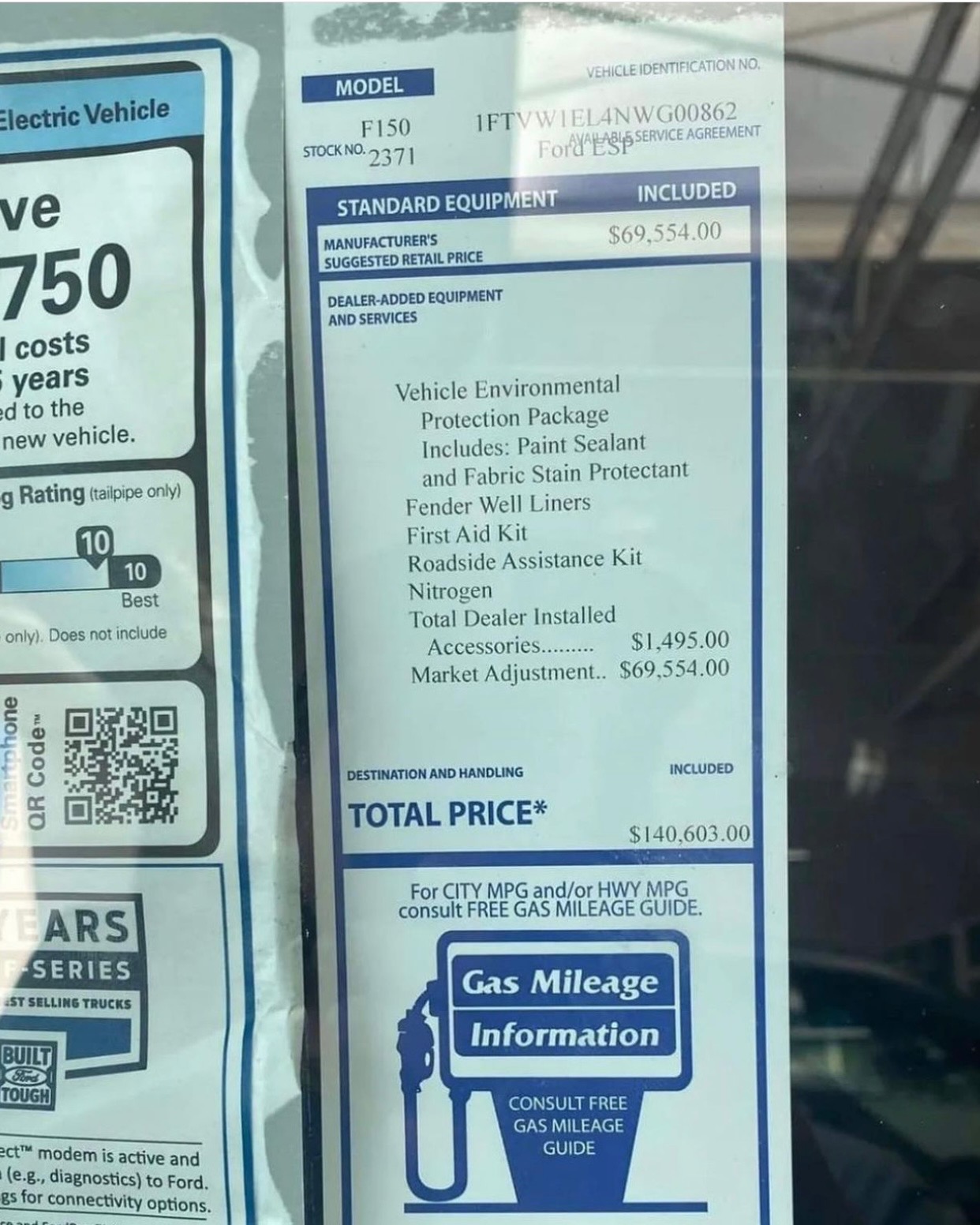 UPDATE 6/8/2022, 2:58 pm: Ford’s North American Product Communications Director, Mike Levine, said Gary Smith Ford confirmed the sticker was an error as the MSRP was input twice online, which is why the MSRP and market adjustment are the same price. This sticker was mistakenly placed on a demo unit and was removed within 24 hours, Levine told Teslarati.

This is inaccurate. The dealer confirmed it was an error and the MSRP was input twice online. In fact this a demo unit and not for sale. The sticker was removed within 24 hours. https://t.co/KbaGdNukj6

Ford dealerships are starting to receive units of the all-electric F-150 Lightning and they are applying massive market adjustments despite corporate’s stern orders not to do so several months ago.

In Florida at Gary Smith Ford in Fort Walton Beach, a Ford F-150 Lightning Pro trim, which is retailed at $69,554, is having its market price doubled thanks to a markup applied by the dealership. The cost of the truck after accessories and the market adjustment eclipses $140,600.

The picture comes courtesy of RDeFran, a member of the F-150 Lightning Forum, who was sent the photograph by a friend on vacation.

Just after Ford announced production of the F-150 Lightning had begun in late April, the company sent a message to dealers warning them of stern repercussions that could come with applying dealership markups.

“The sale of any F-150 Lightning FCTP (Ford Courtesy Transportation Program) Mannequin unit to a final customer prior to meeting all in-service requirements will result in a penalty of $25,000 unless the FCTP Mannequin unit can be replaced with another F-150 Lightning within 90 days,” Ford said in its communication to dealers. “It will also result in the unit being ineligible for any retail bonus cash incentives and chargeback of any FCTP 30/60/90/120 Day incentives and will result in dealer ineligibility for future FCTP Mannequin programs.”

This did not necessarily stop some dealers from applying the markups, as DCH Ford of Thousand Oaks in Westlake Village, California, also had several hefty markups on its F-150 Lightning units. Another Ford dealer in Napa, California, had a 2022 F-150 Lightning Platinum listed for almost $134,000, a roughly $40,000 increase in price from its MSRP.

Ford has lofty plans for the F-150 Lightning and plans to build at least 160,000 units of the vehicle annually. The vehicle is a part of the automaker’s massive switch to electrification, which it recently committed to with a $3.7 billion investment into new EV (and, unfortunately, ICE) products, which will establish 6,200 additional UAW jobs.