Porsche has several camouflaged Taycan prototypes doing real-world tests across the globe. Earlier this month, one was spotted charging at a CCS station in Germany, and not long after that, another prototype was spotted track testing at the Nurburgring. Even more recently, two camouflaged Taycan test units were photographed in Christchurch, New Zealand, providing what could very well be the closest look yet at the test vehicles’ interior.

The images of the Taycan prototypes’ interior were shared on Facebook by Tesla Model S owner and Taycan reservation holder Jim Roger Johansen and car enthusiast Michael McDonald. The pictures of the camouflaged Taycan’s interior include provisional elements such as a large, landscape-oriented display at the center of the dashboard, as well as fully-covered door panels and seats. That said, what is visible in the image is quite compelling.

(Update: The images were removed as per request of the owner of the location where the Taycan prototypes were being stored.)

Immediately noticeable from the recently shared pictures is the vehicle’s instrument cluster, which is made up of just one large screen, similar to that of the Tesla Model S. The rather expansive instrument cluster also appears to be taken directly from the Mission E sedan concept car that Porsche unveiled back in 2015 at the Frankfurt Motor Show as well. Also prominent in the camouflaged Taycan interior shots is a steering wheel that features a healthy amount of buttons and a pair of Model 3-esque scroll wheels. Overall, the steering wheel of the Taycan prototypes looked very similar to the steering wheel of the Mission E Cross Turismo concept, save for the latter’s Sport Response knob, which controls the vehicle’s driving modes.

The combination of the prototype’s clean, sleek digital instrument cluster and its button-filled steering wheel invokes an effect that is very characteristic of Porsche. The company, after all, has an almost notorious reputation for going a bit overboard with the buttons on its vehicles. The Porsche Panamera for one, almost became a meme due to the legacy automaker’s decision to cram a whopping 44 buttons and switches on the vehicle’s center console alone. Other models such as the Cayenne and the Macan also adopted the same button-heavy theme. 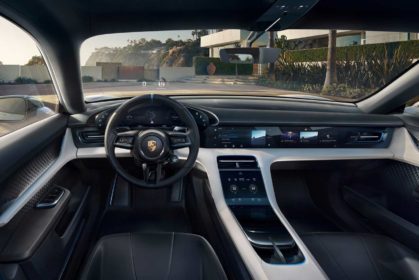 Porsche is aiming to start production of the Taycan (formerly known as the Mission E sedan), sometime next year. Despite production expected to be a year or so away, the German automaker has already started accepting pre-orders for the vehicle. In the United States alone, Porsche is offering a Deposit Option Program, which allows customers to pre-order the electric car. Porsche Managing Director Alexander Pollich also noted that the Taycan is garnering a strong, positive reception from customers so far.

The Taycan is expected to feature Porsche’s trademark performance. The vehicle is listed with a 0-60 mph time of 3.5 seconds, a range of 310 miles per charge, and a top speed of 155 mph. The electric car is expected to be produced at Porsche’s facility in Stuttgart, Germany, where the company produces vehicles like the 911, 718 Boxster, and the 718 Cayman. The legacy automaker is expecting to produce 20,000 units of the Taycan annually when the electric car enters production.