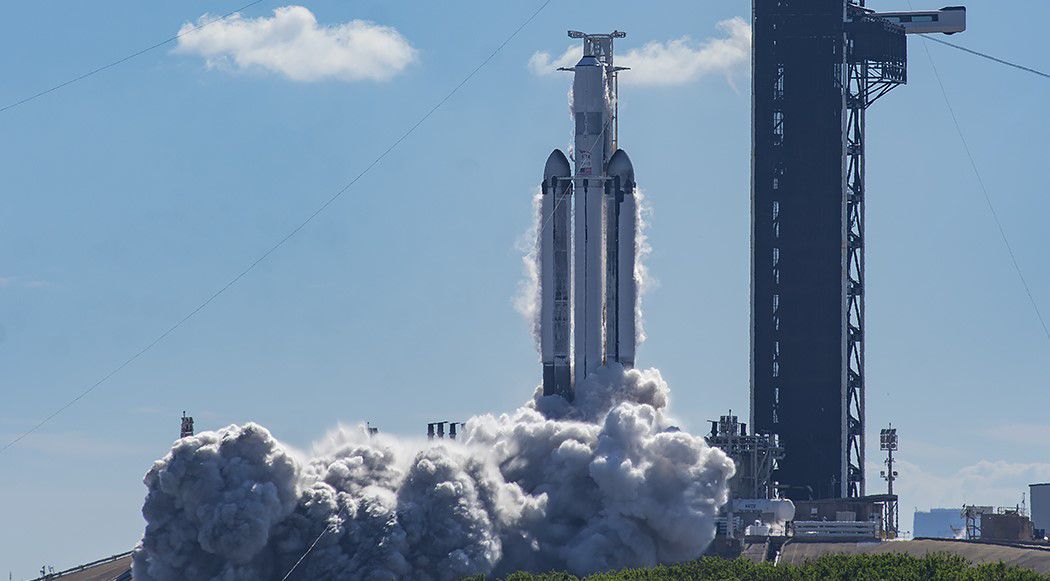 If Falcon Heavy does launch shortly after sunset, it could put on a spectacular show, lighting up the twilight skies for hundreds of miles up and down the East Coast.

The fifth Falcon Heavy rolled out of SpaceX’s Kennedy Space Center Pad 39A integration hangar on January 9th and went vertical early on January 10th. 12 hours later, it was loaded with ~1500 tons (~3.3 million lbs) of liquid oxygen and kerosene propellant and ignited for about eight seconds. SpaceX uses static fire tests more liberally than most other launch providers to try to ensure that all systems – propulsion included – are cooperating before liftoff.

At full throttle, Falcon Heavy Block 5’s 27 Merlin 1D engines – nine per Falcon 9-derived booster – can produce 2326 tons (5.13 million lbf) of thrust at sea level, making it the most powerful privately-developed rocket in history. In terms of performance, Falcon Heavy is the fifth most capable rocket ever built and is second only to NASA’s Space Launch System (SLS) today. While the records of N1, Saturn V, and Energia still stand, all three were retired decades ago.

As is the norm for a rocket with as little experience as Falcon Heavy, SpaceX conducted the static fire test without the USSF-67 payload installed. Like USSF-44, a virtually identical Falcon Heavy launch with similar payloads that launched on November 1st, 2022, SpaceX needs to roll the USSF-67 rocket back to the hangar for fairing installation. During USSF-44, SpaceX took approximately 110 hours to go from static fire to liftoff.

USSF-67’s static fire occurred about 100-104 hours before its scheduled liftoff, meaning that SpaceX only needs to be about 5% more efficient to be ready to launch on Saturday, January 14th. Assuming Falcon Heavy returns to the hangar and rolls back to the pad about as quickly as USSF-44, the odds of a Saturday launch are decent.

Like USSF-44, Falcon Heavy will sacrifice one of its three boosters (the center core) to launch USSF-67 directly to a circular geosynchronous orbit ~35,800 kilometers (~22,250 mi) above Earth’s surface. A satellite operating at GSO will never stray from the same region of Earth, making it useful for communications and surveillance. Getting there, however, can be exceptionally difficult.

“To simplify the rocket’s job, most GEO-bound satellites are launched into an elliptical geosynchronous or geostationary transfer orbit (GTO) and use their own propulsion to circularize that ellipse.

On a direct-to-GEO launch, the rocket does almost all of the work. After reaching a parking orbit in Low Earth Orbit (LEO), Falcon Heavy’s upper stage will complete a second burn to reach GTO. Then, while conducting a complex ballet of thermal management and tank pressure maintenance to prevent all of its cryogenic liquid oxygen (LOx) from boiling into gas and its refined kerosene (RP-1) from freezing into an unusable slush, the upper stage must coast ‘uphill’ for around five or six hours.

During that journey from 300 kilometers to 35,800 kilometers, the upper stage must also survive passes through both of Earth’s Van Allen radiation belts. At apogee, Falcon S2 must reignite its Merlin Vacuum engine for a minute or two to reach a circular GSO. Payload deployment follows soon after and could last anywhere from a few minutes to hours. Finally, to be a dutiful space tenant, Falcon’s upper stage must complete at least one more burn to reach a graveyard orbit a few hundred kilometers above GEO.”

The USSF-67 payload is mostly a mystery. Like USSF-44, it will carry a Northrop Grumman LDPE (Long Duration Propulsive EELV) with several unspecified rideshare payloads. LPDE is a transfer vehicle capable of deploying small satellites into customized orbits and hosting payloads for months in space.