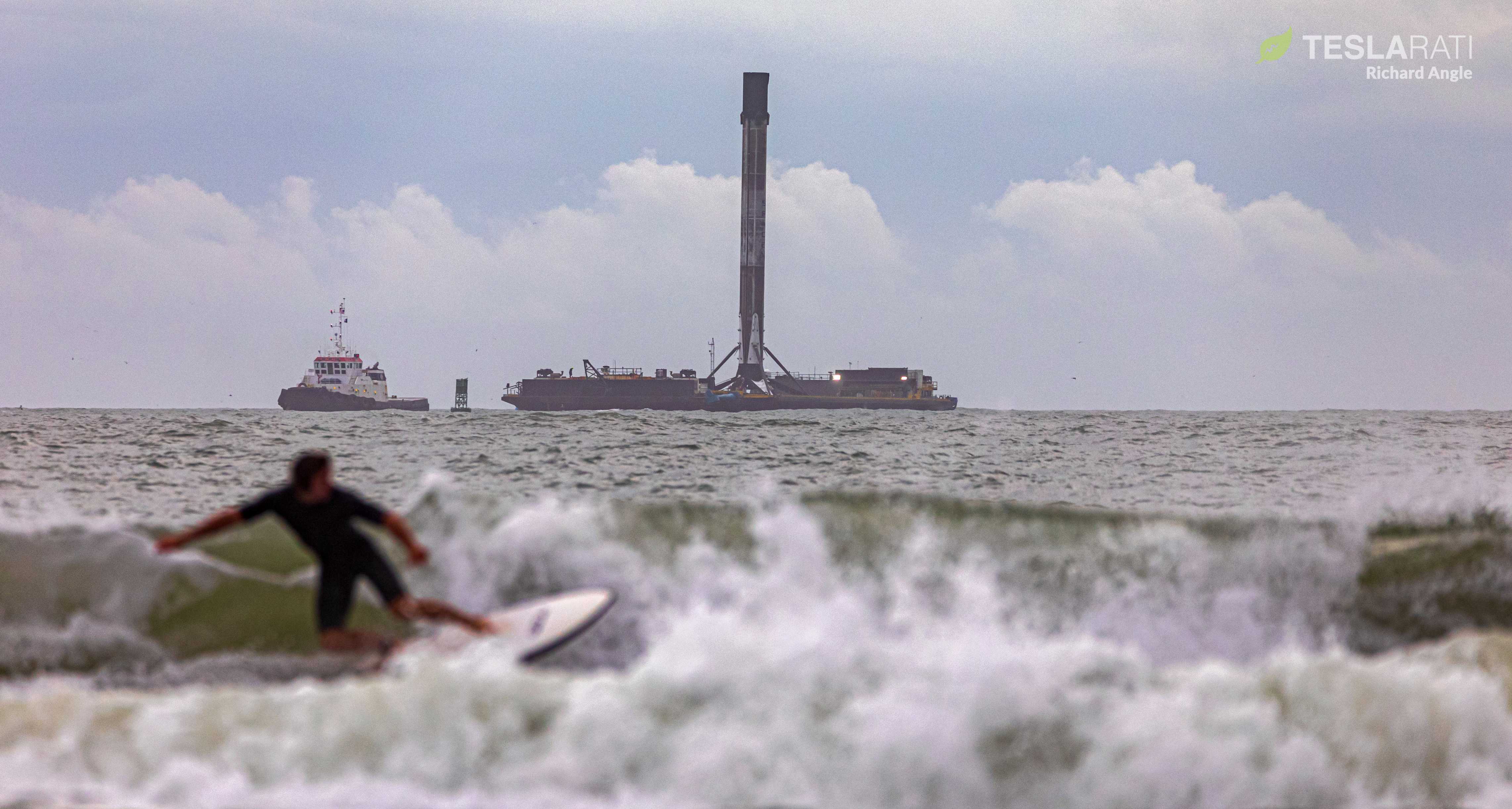 Drone ship OCISLY returned to port on November 15th after a successful Falcon 9 landing. On December 1st, the ship departed for its next booster recovery. (Richard Angle)

SpaceX’s next Falcon 9 launch and landing is well into the late stages of preparation, leaving the company approximately 24-48 hours away from its next mission to orbit. To support the surprise ocean landing, a drone ship has already been dispatched and recently departed Port Canaveral.

After a frenetic week of preparation, tugboat Hawk departed with drone ship Of Course I Still Love You (OCISLY) on December 1st, preparing for its second recovery attempt in roughly three weeks and SpaceX’s second drone ship landing after a rare, six-month rocket landing lull. In the days leading up to the anticipated departure, workers could be seen performing a routine procedure often nicknamed a “FOD-walk” in which a given surface is scoured for Foreign Object Debris (FOD). This is most commonly performed on runways (including aircraft carriers) and attempts to mitigate or fully prevent damage from rocks and other small debris.

In the case of Falcon booster landings, the rocket’s Merlin 1D engine exhaust velocity is just shy of 3000 m/s (6700 mph), meaning that a tiny rock or leftover rocket piece could almost immediately become a high-subsonic or supersonic projectile in the seconds before touchdown. The drone ship itself is most at risk, but those theoretical projectiles could potentially bank off the platform’s exhaust shields and hit the booster itself, causing far costlier damage.

And hence the FOD-walk pictured above. Once complete, OCISLY was cleared for departure and has since made it about 75% of the way to its planned landing zone coordinates. SpaceX is currently scheduled to launch Cargo Dragon resupply mission CRS-19 on a Falcon 9 rocket no earlier than 12:51 pm EST (16:51 UTC) on December 4th, although a specific weather condition may delay the instantaneous window by 24 hours. Hawk and OCISLY should thus arrive on station one or two days before launch.

As it turns out, this Falcon 9 landing is a bit of mystery: it’s unclear why exactly SpaceX has decided to land the booster at sea instead of the usual Landing Zone recoveries that have followed most recent Cargo Dragon launches. Typically, the low insertion orbit (~200 km x ~390 km) and relatively low mass of Cargo Dragon (less than 10 tons or 22,000 lb) means that Falcon 9 has (literally) tons of propellant left over, giving it the margins needed to flip around, cancel out a huge amount of horizontal velocity, and boost 100+ km (62+ mi) back to shore.

Instead, new Falcon 9 booster B1058 is scheduled to land aboard drone ship OCISLY some 350 km (220 mi) downrange, an unusual distance. For reference, SpaceX’s May 2019 CRS-17 mission is the only time Falcon 9 has landed at sea after a CRS launch since CRS-8, the rocket’s first successful drone ship recovery. That scenario was forced because LZ-1/2 had coincidently been showered in Crew Dragon debris after C201 exploded during testing. Even then, OCISLY was stationed just 20 or so kilometers offshore, meaning that Falcon 9 B1056 still performed a routine Return To Launch Site (RTLS) landing in spirit.

In short, the ~350-km-downrange landing plan suggests that this Cargo Dragon launch may have a much smaller propellant margin than essentially every similar mission preceding it. This could be explained in a few ways. Maybe after Falcon 9 B1050’s surprise landing failure, SpaceX decided that all new Falcon 9 boosters will attempt drone ship landings after their first flight, minimizing the risk to Cape Canaveral in the event of a CRS-16 repeat. Another possibility, Crew Dragon capsule C205 – scheduled to support the spacecraft’s In-Flight Abort (IFA) test late this month or early next – may still be close to the Cape’s Landing Zones, another reason to avoid even the slightest chance of a catastrophic Falcon landing failure.

Finally, it’s also possible that CRS-19 will follow in the footsteps of CRS-18, which sported a prototype Falcon 9 upper stage designed to push the enveloped of its orbital longevity. Falcon 9 B1056 still managed to land at LZ-1 after CRS-18, but a more ambitious follow-on test could potentially require much more propellant, accounting for the drone ship’s position further downrange. With any luck, we’ll find out more later today during SpaceX, NASA, and the US Air Force’s routine pre-launch press conference – stay tuned!