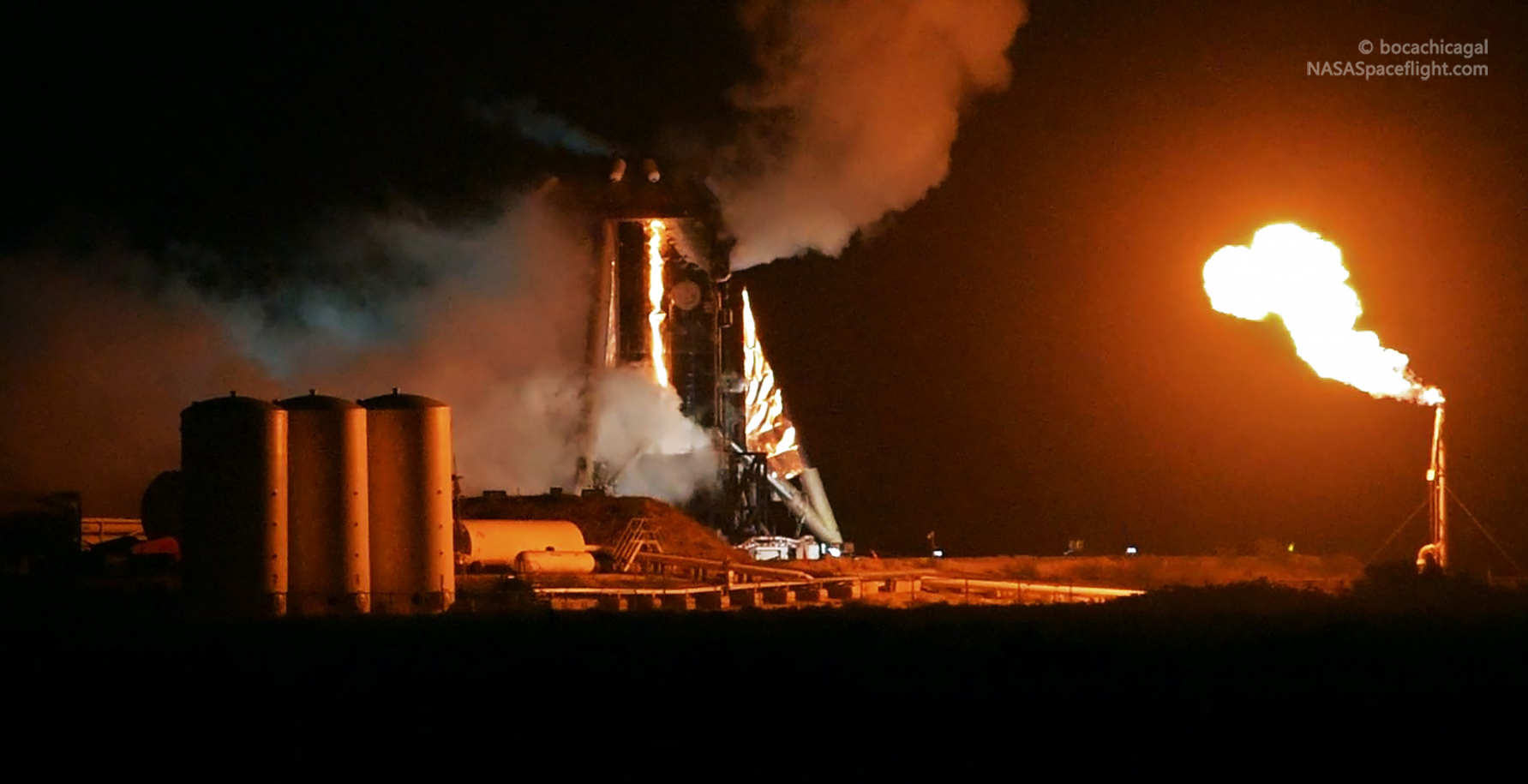 SpaceX has (partially) ignited Starhopper’s freshly-installed Raptor engine, successfully verifying that the engine is ready for its next major test: a full ignition and static firing. Although successful, SpaceX still has some work to do before the vehicle is ready for its first untethered flight(s).

July 15th’s progress is just the latest in a several day-series of preflight tests designed to reduce the likelihood that Starhopper is destroyed over the coming days and (hopefully) weeks. If all goes planned during the awkward Starship prototype’s first foray into hover tests, SpaceX CEO Elon Musk has stated that he will provide an official presentation updating the public on the status of the company’s ever-changing next-generation rocket.

The past week or so of Starhopper preflight testing began with Raptor serial number 6 (SN06) completing the last of a series of acceptance test fires in McGregor, Texas on June 10th. Even on its own, this was a major milestone for the new SpaceX engine: Raptor SN06 was the first of the new, full-scale engines to pass the acceptance test program with flying colors. According to Musk, for the engine to complete those tests so successfully, SpaceX had to solve a challenging bug in which some sort of mechanical resonance (i.e. vibration) damaged or destroyed Raptors SN01-05.

Hours later, the engine began a short ~450 mi (720 km) journey south to Starhopper, located in Boca Chica, Texas. The engine arrived on July 11th and was fully installed on Starhopper by the following evening (July 12th), at which point SpaceX put Starhopper and Raptor through some mild but valuable thrust vector controller (TVC) tests, wiggling the car-sized engine to ensure it can accurately steer the prototype rocket.

Around two days after the above ‘wiggle’ test was successfully completed, SpaceX moved into the next stage, partially fueling Starhopper with liquid methane and oxygen propellant and helium pressurant in what is known in rocketry as a wet dress rehearsal (WDR). The (implicitly) successful WDR was capped off with a duo of what can now safely be concluded were some sort of Raptor test preceding even pre-ignition operations. Whatever the tests were, they appear to have been completed successfully.

That appears to be the case because less than 24 hours after their completion, on July 15th, SpaceX once again began loading Starhopper with propellant and pressurant for a second round of wet testing. This time around, SpaceX got right into more critical Raptor tests once enough propellant was loaded, igniting the engine’s interwoven oxygen and methane preburners.

Previously discussed 24 hours ago in a Teslarati article focused on Raptor wiggles and other miscellaneous tests, Raptor is an extremely advanced rocket engine based on a cycle (i.e. how propellant is turned into thrust) known as full-flow staged combustion.

“In a staged-combustion engine like Raptor, getting from the supercool liquid oxygen and methane propellant to 200+ tons of thrust is quite literally staged, meaning that the ignition doesn’t happen all at once. Rather, the preburners – essentially their own, unique combustion chambers – ignite an oxygen- or methane-rich mixture, the burning of which produces the gas and pressure that powers the turbines that bring fuel into the main combustion chamber. That fuel then ignites, producing thrust as they exit the engine’s bell-shaped nozzle.

Unintuitively, conditions inside the preburner – hidden away from view – are actually far more intense than the iconic blue, purple, and pink flame that visibly exists Raptor’s nozzle. Much like hot water will cool while traveling through pipes, the superheated gaseous propellant that Raptor ignites to produce thrust will also cool (and thus lose pressure) as it travels from Raptor’s preburner to its main combustion chamber. If the pressure produced in the preburners is too low, Raptor’s thrust will be (roughly speaking) proportionally limited at best. At worst, low pressure in the preburners can trigger a “hard start” or shutdown that could destroy the engine. According to Elon Musk, Raptor’s oxygen preburner thus has the worst of it, operating at pressures as high or higher than 800 bar (11,600 psi, 80 megapascals).”

In full-flow staged combustion (FFSC), even more complexity is added as all propellant that touches the engine must necessarily end up traveling through the main combustion chamber to eke every last ounce of thrust out of the finite propellant a rocket lifts off with. As such, FFSC engines can be about as efficient as the laws of physics allow any given chemical rocket engine to be, at the cost of exceptional complexity and brutally difficult development.

Additionally, FFSC physically requires two separate preburners and then makes things even harder by making each separate preburner (methane and oxygen) depend on each other’s operation for the engine to fully ignite. This means that no individual preburner can be used to kickstart Raptor – instead, SpaceX must somehow spin the turbopumps that feed propellant into each preburner with some separate system. This is all just to emphasize the fact that Raptor’s ignition sequence is a spectacularly complex orchestra of valves, spark plugs, sensors, and magic. This is why it’s valuable for Raptor to test its preburner system independently of an actual ignition test, at least as long as the engine is still in the development stages.

According to NASASpaceflight.com managing editor Chris Bergin, what this practically translates to is a minor Starhopper hover test delay of 1-2 days, while the static fire has also been pushed roughly 24 hours from July 15th to July 16th. If that full static fire produces lots of happy data, Starhopper could be cleared for a hover test debut attempt as early as Wednesday or Thursday (July 17/18).