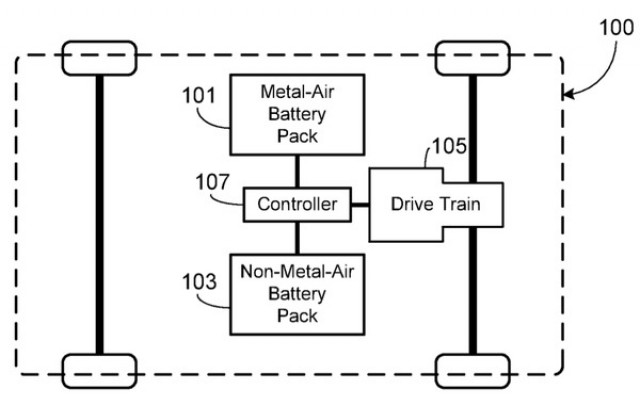 Global Equities Research reports that Tesla Motors may be building a new hybrid battery pack.  Based on the filed Patents 20130181511 and 20130187591, analyst Tom Chowdry notes that these patents relate to “Electric Vehicle Extended Range Hybrid Battery Pack System” and have Metal-Air Battery Pack and Non-Metal Air Battery Pack components.  By combining a standard, lithium-ion battery with a metal-air battery where oxygen is used as an electrode, we can potentially see 400+ miles of range in future versions of the Model S, Model X.

While nothing official has been announced, Chowdhry estimated that the battery could be ready for new Tesla vehicles in 2015.

It’s well known that Panasonic (OTC: PCRFY) is the main supplier of Tesla’s lithium-ion battery packs and has a four-year contract to deliver battery cells for 80,000 Tesla vehicles.  However, Chowdhry states that he does not expect Panasonic to build these batteries leaving Samsung (OTC: SSNLF) as the rumored supplier for the metal-air batteries to come.

“I don’t think Panasonic or even Samsung could be a leader in the metal-air battery [production],” Chowdhry told Benzinga. “I think there could be some other players, [but] we don’t know who it is.”

The need for lithium-ion batteries will eventually dwindle and give way to metal-air batteries which could account for as much as 40% of the electric car market.