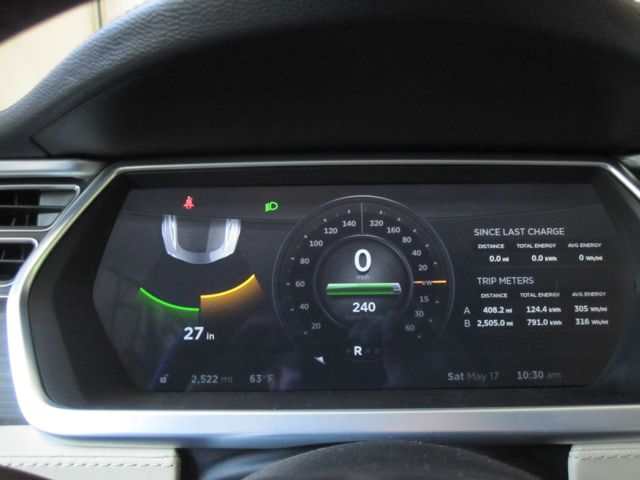 At 196″ long and 77.3″ wide, the Tesla Model S is larger than some 7-seater SUVs so it comes as no surprise that maneuvering it into a parking space may require a bit of finesse. Luckily the vehicle is equipped with some technological advancements that just may provide some relief to the parking challenged. The latest version of the Model S is eligible for a $500 parking sensor upgrade during the time of configuring your car. However older versions of the Model S will require a $5000 – $6000 retrofit.

The parking sensor package includes front and rear proximity sensors that warn the driver of nearby objects via audible (mutable) and visual indicators. The sensors are intelligent enough to only trigger during low speeds.

The visual indicators appear on both the left side of the dash as well as on the 17″ touchscreen . It’s especially useful on the center touchscreen when combined with the rear view camera.

I’ve found the sensors to be incredibly accurate in terms of reporting distance from objects, although it was a bit slow to activate. Approach objects slowly and carefully to account for this activation delay.

For a mere $500, a small price to pay relative to the overall price of the car, upgrading the Model S with parking sensors is really a no-brainer. Rumors suggest that Tesla may leverage these sensors in the future, hopefully in conjunction with the adaptive cruise control, for an auto pilot feature, but who knows – maybe it’s just wishful thinking. The Tesla Model S is equipped with a high definition backup camera that has a really wide viewing angle. This camera can be activated at any time (even while driving) and will occupy  1/2 of your 17″ display. The quality is amazing and, while there are some benefits to using it while driving or sitting in traffic (like watching the person behind you shave), the main purpose of the camera is for backing up.

The rear view camera will automatically engage along with the parking sensors when the Model S is put into reverse. I can’t see any reason why an owner would accidentally damage the rear of the Model S while reversing with the combination of these two features.

The front is a different story all together. There’s no front view camera for parking. The parking sensors can take time to activate and sometimes don’t activate depending on curb height. The Tesla front is long and fairly low and it’s pretty easy to scrape the underside of the body on curb stops. This unfortunately happened to me on my very first day of driving the Model S.

That was enough to scare me into parking far away from obstacles now. The back of my Model S usually sticks out quite a bit when I park. So far that hasn’t been an issue but it is something I’ve been worried about. I’d love to see Tesla offer a front camera on the Model S, although I know there’s been ways to hack a Tesla Model S front camera together.

The side mirrors have two features (bundled with the technology package) that aid in parking.

The first option auto-tilts the side mirrors when you the Model S is placed into reverse. Setting the mirror angles for reverse can be achieved by putting your foot on the brake, putting the car in reverse, and then setting your mirrors to the desired position. The Model S will then prompt you to save these mirror settings to your profile. The mirrors will automatically adjust to this position the next time you go into reverse.

The second option is to fold your mirrors in when squeezing into tight space. There’s a button in the middle of the mirror adjustment controls that will fold or unfold your mirrors whenever you want. If your garage is narrow or you’re off-center within your parking space, fold the mirrors down for more clearance.

You can also configure the mirrors to auto-fold when you walk away from the car. This isn’t a useful feature to me since the mirrors don’t stick out all that much and it’s really unlikely someone will smash your mirrors while not damaging the rest of the car. I had this feature enabled for the first week before deciding that I liked the look of the car parked with the mirrors in the normal position, better.

The Model S is a wide and long car but it has some great features that make parking easier. The parking sensors are a very useful and inexpensive option which I think is a must buy. That combined with the built-in rear view camera will help your Model S remain as dent and ding free as possible.