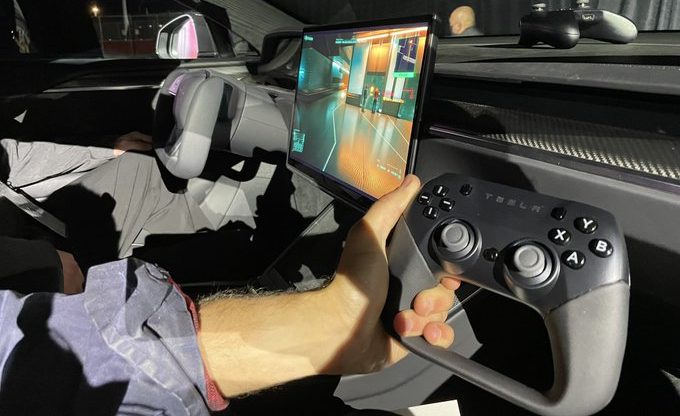 When Tesla formally announced the Model S Plaid in its Q4 and FY 2020 Update Letter, the company was quick to point out that company’s new flagship sedan would feature a 10-teraflop infotainment system. Musk even went on to say later that the new Model S and Model X’s infotainment system would be powerful enough to run PS5-level games.

During the Model S Plaid’s delivery event, Tesla definitely proved that there was no hyperbole when it comes to the flagship vehicles’ gaming capabilities. While showing off the car’s features, Tesla featured a segment showing the Model S Plaid running Cyberpunk 2077 in 60 fps. Attendees of the event later saw these for themselves, with some even noting that Tesla has made some gaming controllers for its flagship cars.

The Tesla Model S Plaid’s PS5-level infotainment system and its performance were received warmly on social media. Comments on Twitter from the gaming community even poked fun at the fact that Cyberpunk 2077 seemed to be running better in the Model S Plaid’s infotainment system compared to actual gaming consoles. This was a reference to the AAA title’s rather infamous and frequent crashing issues.

What is rather interesting is that Tesla seems to be developing its own gaming controllers as well. Images shared by attendees of the event revealed Tesla made controllers with a unique shape that seemed perfect for driving games. The Tesla controllers found inside the Model S Plaid cars also featured a Tesla badge. The Tesla gaming controller had two analog sticks at the bottom, similar to the PlayStation 5’s DualSense wireless controller.

The secret to Tesla’s ridiculous infotainment system for the Model S and Model X lies in the AMD chips that power them. Earlier this month, AMD CEO Dr. Lisa Su confirmed during the company’s Computex keynote that the Model S and Model X would feature RDNA 2 GPU architecture. Coupled with an AMD Ryzen processor, this allows the flagship sedan and SUV to run AAA games without breaking a sweat.

With these upgrades in mind, it appears that Supercharging sessions just got a lot more enjoyable.