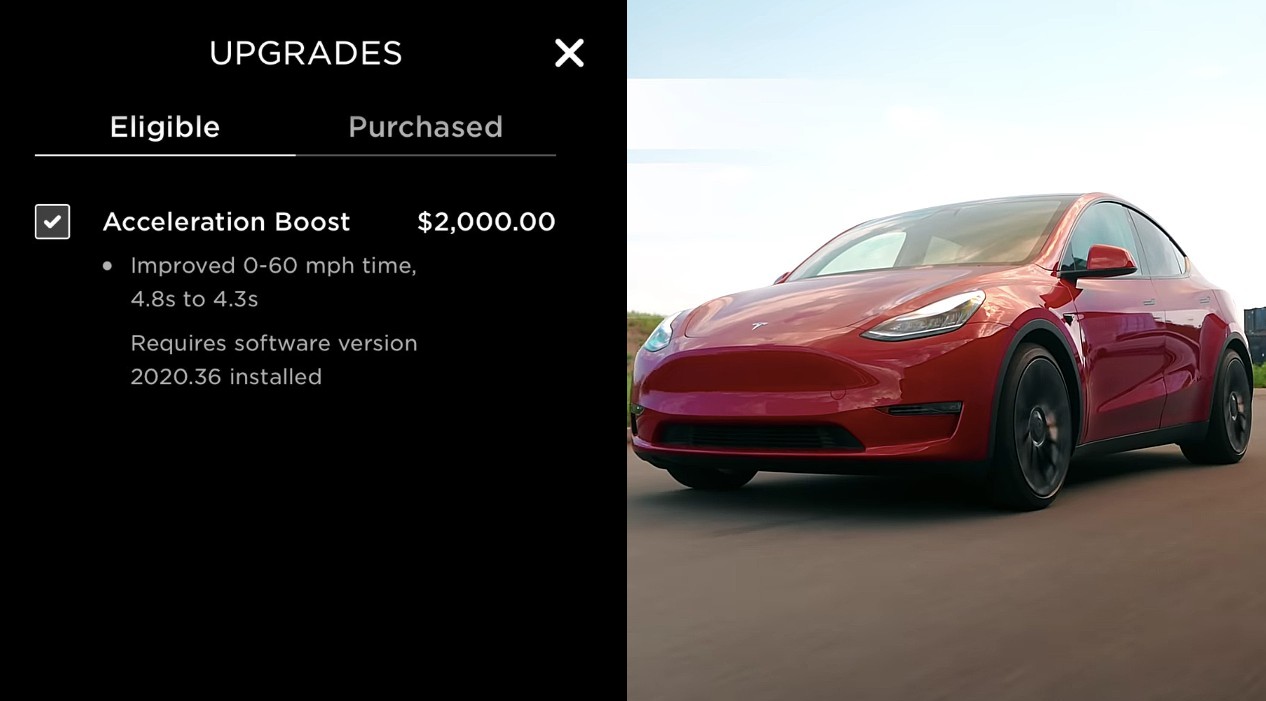 Tesla has released a paid Acceleration Boost upgrade for the Model Y Dual Motor AWD. The upgrade, which could be purchased for $2,000 through the “Upgrades” tab in the Tesla mobile app, improves the 0-60 mph performance of the all-electric crossover from 4.8 seconds to 4.3 seconds. That’s about 10% quicker than the vehicle’s initial performance.

As noted by the company in its Acceleration Boost purchase page, Model Y owners who wish to buy the upgrade would need to have a vehicle that has software version 2020.36 installed. The company also noted that the upgrade is not eligible for a refund after 48 hours of purchase.

This is not the first time that Tesla rolled out a paid upgrade for a Dual Motor AWD vehicle. Last December, Tesla introduced a similar offer to owners of the Model 3 Dual Motor AWD that reduced the all-electric sedan’s 4.4-second 0-60 mph time to just 3.9 seconds. That’s a half-second improvement, similar to what the electric car maker recently released for the Model Y.

The upgrade thoroughly impressed the EV community, as it highlighted Tesla’s capability to release performance improvements to its cars through an over-the-air software update. Very few carmakers today are capable of OTA updates, after all, and even fewer are able to roll out features and improvements similar to Tesla. Tests from Tesla community members who bought the Acceleration Boost showed that the upgraded vehicles were indeed faster.

It would not be too surprising if the Model Y Dual Motor AWD’s paid Acceleration Boost upgrade makes the all-electric crossover even faster than expected. During the weeks that followed the in-app purchase’s release for the Model 3, owners of the all-electric sedan who purchased Acceleration Boost recorded even better performance than what Tesla stated. One owner who used a Dragy during real-world tests showed a 0-60 mph time of 3.48 seconds in an upgraded Model 3 Dual Motor AWD. That’s faster than the initial version of the Model 3 Performance, which had a 0-60 mph time of 3.5 seconds.

The Tesla Model Y is one of the most fun crossovers in the market thanks to its driving dynamics and excellent performance, with reviewers noting that even the non-Performance variants of the vehicle were great to drive. With an Acceleration Boost upgrade, the Tesla Model Y will be even more impressive, especially for owners who love surprising the occasional ICE car in impromptu stoplight sprints.