Tesla has reduced the price of its Model Y crossover by $3,000 in North America. The price reduction comes roughly three months after the company began delivering its first production Model Y cars to customers in March, and one month after the company cut prices across its entire Model S, Model X, and Model 3 lineup.

Side-by-side comparison of Tesla’s online configurator for the Model Y shows the price differences between the two variants. 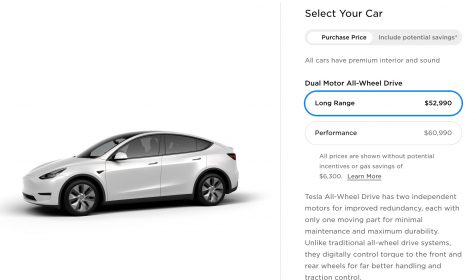 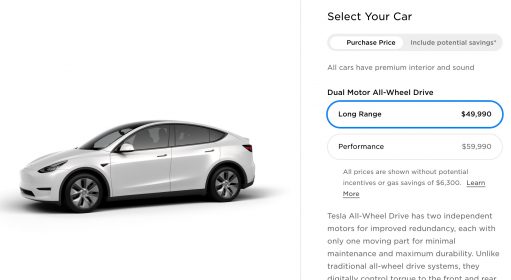 Model Y’s price cut follows a price increase of Tesla’s Full Self-Driving suite on July 1st, by $1,000, from $7,000 to $8,000 across its entire fleet of vehicles. CEO Elon Musk had previously warned of a worldwide price hike for the company’s “Full Self Driving” driving-assist feature, citing a change in price to match the increased value of the software as it becomes more advanced.

“The FSD price will continue to rise as the software gets closer to full self-driving capability with regulatory approval. It that point, the value of FSD is probably somewhere in excess of $100,000,” tweeted Musk, back in May.

Tesla’s increased revenue stream from its Autopilot suite – destined to become the company’s cash cow as it nears Level 5 autonomy – has been one of the many factors that have enabled the company to pass along savings to buyers of its all-electric vehicles.

Back in May, Tesla discontinued its long-running Free Unlimited Supercharging Program that benefited buyers of its flagship Model S and Model X vehicles. By taking the cost of utilities off its books, Tesla was able to pass that back to Model Y consumers and beyond.

Combined with wide-scale efficiencies being realized across its supply chain, production lines, and macro-level economics in its manufacturing, Tesla is on the cusp of reaching price parity with combustion engine vehicles.

Tesla is expected to make a major announcement on September 22 when the company will hold a joint annual shareholder meeting and Battery Day presentation.