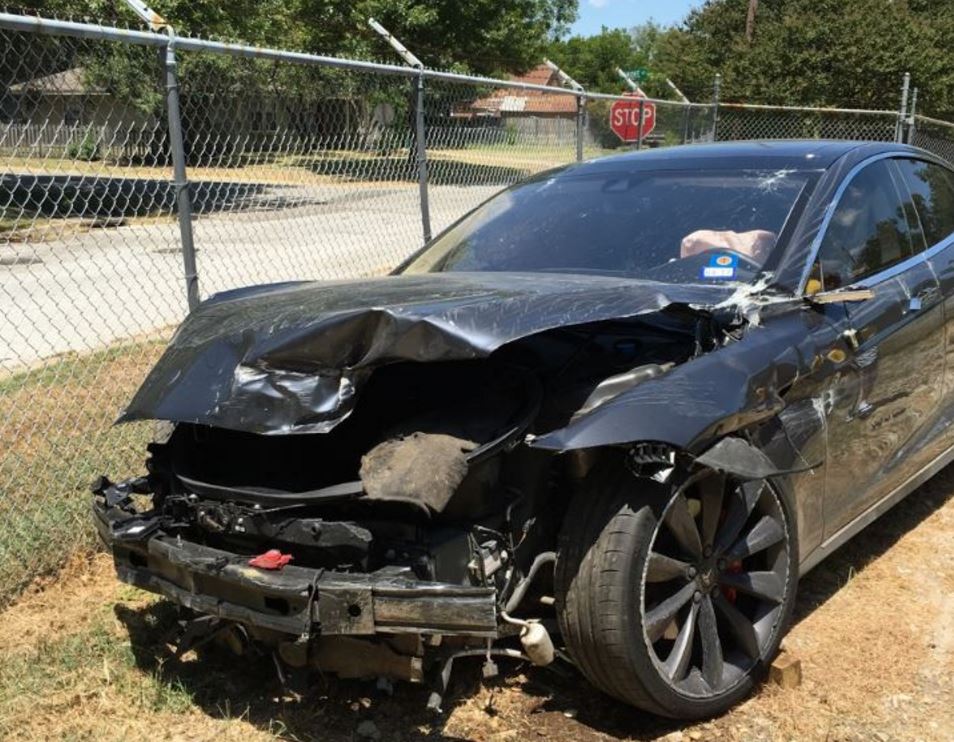 The owner of a Tesla Model S that crashed on August 7 while operating in Autopilot mode says he will not sue Tesla Motors. Mark Molthan says he was driving along highway 175 near rural Kaufman, Texas when his Tesla in Autopilot swerved into a cable guardrail resulting in significant damage to the car. Luckily Molthan was not hurt and escaped with only a bloody nose though he thinks the vehicle might be a total loss.

Unlike other Tesla owners who blame their vehicle for causing the accident, Molthan admits he wasn’t paying close attention to his driving at the time. He tells Bloomberg that he reached into the glove compartment to get a cloth and was busy cleaning the dashboard just prior to the first collision. Molthan claimed that he didn’t think much of taking his eyes off the road since his Model S had negotiated that section of road multiple times before on Autopilot without incident.

“I used Autopilot all the time on that stretch of the highway,” Molthan, 44, said in a phone interview. “But now I feel like this is extremely dangerous. It gives you a false sense of security. I’m not ready to be a test pilot. It missed the curve and drove straight into the guardrail. The car didn’t stop — it actually continued to accelerate after the first impact into the guardrail.” Molthan also owns a Model X but says he has lost confidence in Autopilot and will not replace his damaged Model S with another one.

Molthan’s insurance company is none too happy about being on the hook for the price of a new Model S. Lawyers for his auto insurance carrier, a unit of Chubb Ltd., say they have sent Tesla Motors a letter requesting a joint inspection of the vehicle. Tesla said it’s looking into the Texas crash. As usual, it stresses that Autopilot is only an assist feature. Drivers still need to keep their hands on the wheel while using Autopilot and must be prepared to take over direct control of the vehicle at any time.

The situation presents what lawyers like to call a case of first impression. So far as we know, Tesla has not been required to defend any law suits brought as a result of collisions resulting from the use of Autopilot. Any such case would only be a binding precedent in Texas where the accident happened. But other courts could still use that decision as a guide when similar claims are brought in their own states.

Tesla’s Autopilot has many supporters who complain there is no way to demonstrate to the public and to regulators how many potentially life threatening accidents are avoided by the technology. Diana Becker of Los Angeles told Bloomberg in a phone interview, “I’m disgusted that the only time Autopilot is in the news is when there are crashes. Nobody hears about the accidents that don’t happen.”

Becker says she recently completed a 27 day road trip throughout the West with her two children. She credits the Autopilot in her Model X with saving her family from colliding with a driver who crossed suddenly in front of them. “I drove 400 miles a day on our road trip, and Autopilot was my second pair of eyes,” said Becker. “I depend on it.”

In July, a Missouri man let his Tesla drive him to a hospital after suffering a pulmonary embolism while driving home from work. Others have commented that going on a road trip without Autopilot is akin to torture. None of which will have any bearing on how the courts resolve future claims involving damages to self driving cars.