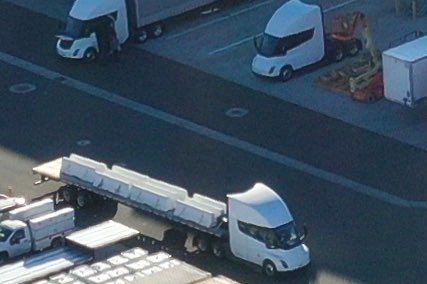 Just recently, Tesla CEO Elon Musk announced that the Tesla Semi has been able to complete a 500-mile trip while weighing in at 81,000 pounds. The announcement was received with much excitement from the electric vehicle community, though questions still remained about the unladen weight of the Semi without its trailer and cargo.

Following Musk’s announcement on Twitter, images of the Tesla Semi seemingly taken near the vehicle’s production facility in Nevada emerged online. One of these images showed a production Tesla Semi pulling a trailer loaded with 11 Jersey barriers. Tesla enthusiasts have speculated that the Semi loaded with the Jersey barriers was likely the vehicle that accomplished the 500-mile feat.

As noted by Paul Lackey, an engineer at the electric drive company EVDrive and the person behind Twitter’s “Nikola Insider” whistleblower account, Jersey barriers typically weigh about 4,000 pounds each. If these estimates are accurate, it would suggest that the Semi was pulling a load of about 44,000 pounds during its 500-mile trip. If one were to consider the weight of the empty 53-foot trailer and Musk’s 81,000-pound total weight comment, it would suggest that the Tesla Semi weighs about 27,000 pounds on its own.

If these estimates are somewhat accurate and the Semi does weigh around 27,000 pounds by itself, it would unsurprisingly be heavier than its ICE-powered counterparts, but not by much. Compared to a diesel-powered tractor trailer that weighs about 20,000 pounds, the Semi would end up carrying about 7,000 pounds less cargo. The Semi, however, has better performance and less maintenance than its conventional rivals in the trucking market.

The Tesla Semi’s weight has been a point of criticism for the vehicle, with skeptics such as Microsoft co-founder Bill Gates previously noting that all-electric Class 8 trucks are not practical because they would be far too heavy. But while Class 8 all-electric trucks like the Semi are indeed equipped with very heavy batteries, they also do not have massive, heavy diesel engines and large transmissions. The absence of these components, as well as Tesla’s constant innovation with its electric motors and batteries, appears to have made the Semi’s weight quite competitive in the trucking market.