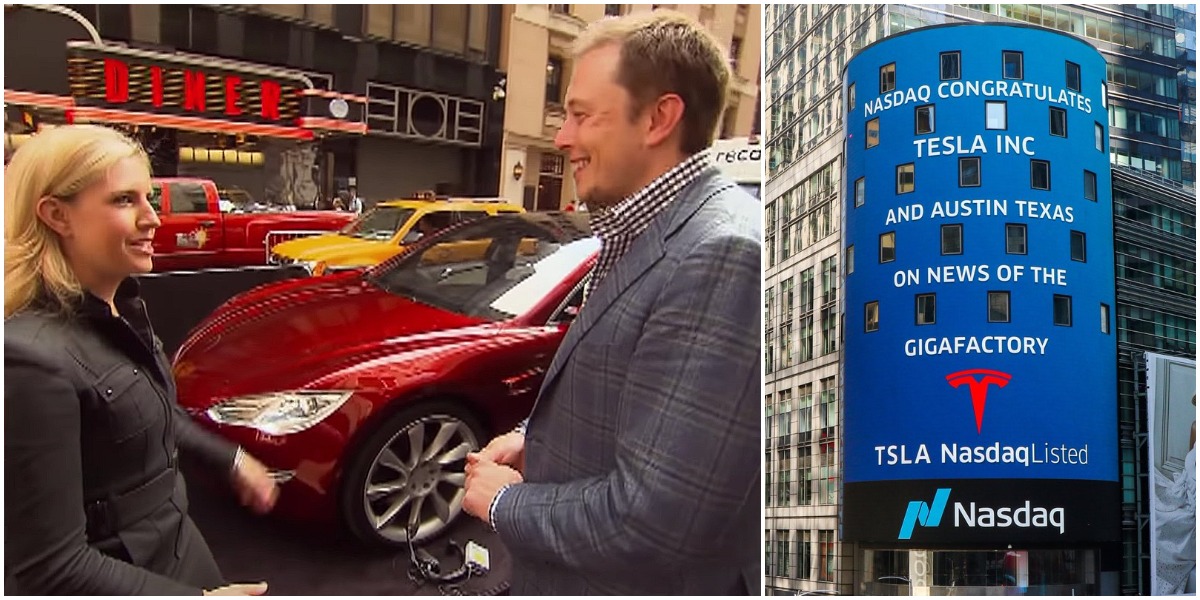 Tesla’s vision for accelerating sustainable energy has gone full circle after NASDAQ congratulated the electric automaker for working on opening a new manufacturing facility in Austin, Texas. However, ten years ago, Elon Musk was in Times Square when his company was working on the Model S after the company’s Initial Public Offering on Wall Street.

Tesla has successfully gone from a small, unlikely successful startup to the most valuable car company in the world. Two years before the Model S hit the road in 2012, Elon Musk was sitting in Times Square with the Brooklyn Diner on 43rd Street to his right and a CNN interviewer in front of him.

The company was going public to raise additional funds for more variants of the Model S platform, Musk said to Poppy Harlow. The Model S had already been funded by a loan from the Department of Energy, which was paid back nine years early.

But at the time, Tesla was not what it was today. In fact, it was not even close.

As documented in the hit documentary “Revenge of the Electric Car,” Tesla was a struggling car company that was hurting financially and working to solve problems with the original Roadster. Musk, griefed by a garage full of faulty electric cars, realized that Tesla was running low on money. That was until the week of Christmas when investors funneled more money into the electric automaker. On top of it, SpaceX won billions in funding from NASA.

Since then, Tesla has built three additional electric cars. Affordability has gone up, costs have gone down, and the company has grown in value and size exponentially in the ten years since Musk was being interviewed in Times Square.

Giga Texas is Tesla’s second U.S.-based production facility, and the fourth overall. Behind the Fremont factory, Giga Shanghai, and Giga Berlin, Giga Texas will offer customers in the Eastern half of North America the Model 3, Model Y, and Cybertruck. Other vehicles, like the Semi, will also be manufactured at the facility.

Impressively, Tesla has managed to go from its first day as a publically traded company to receiving congratulations from NASDAQ for opening a fourth vehicle production facility. Musk and his company have gone full circle in terms of public recognition.

On that day, Tesla opened its public trading with a $17 per share price point. This morning, TSLA is trading at over $2,000 a share.

From a little known company to the biggest automaker in the world, Tesla has overcome all the odds to come full circle. Once a company pleading for investors to get behind its mission, Tesla now has investors in every corner of the world looking to get a slice of the automaker’s valuable stock.