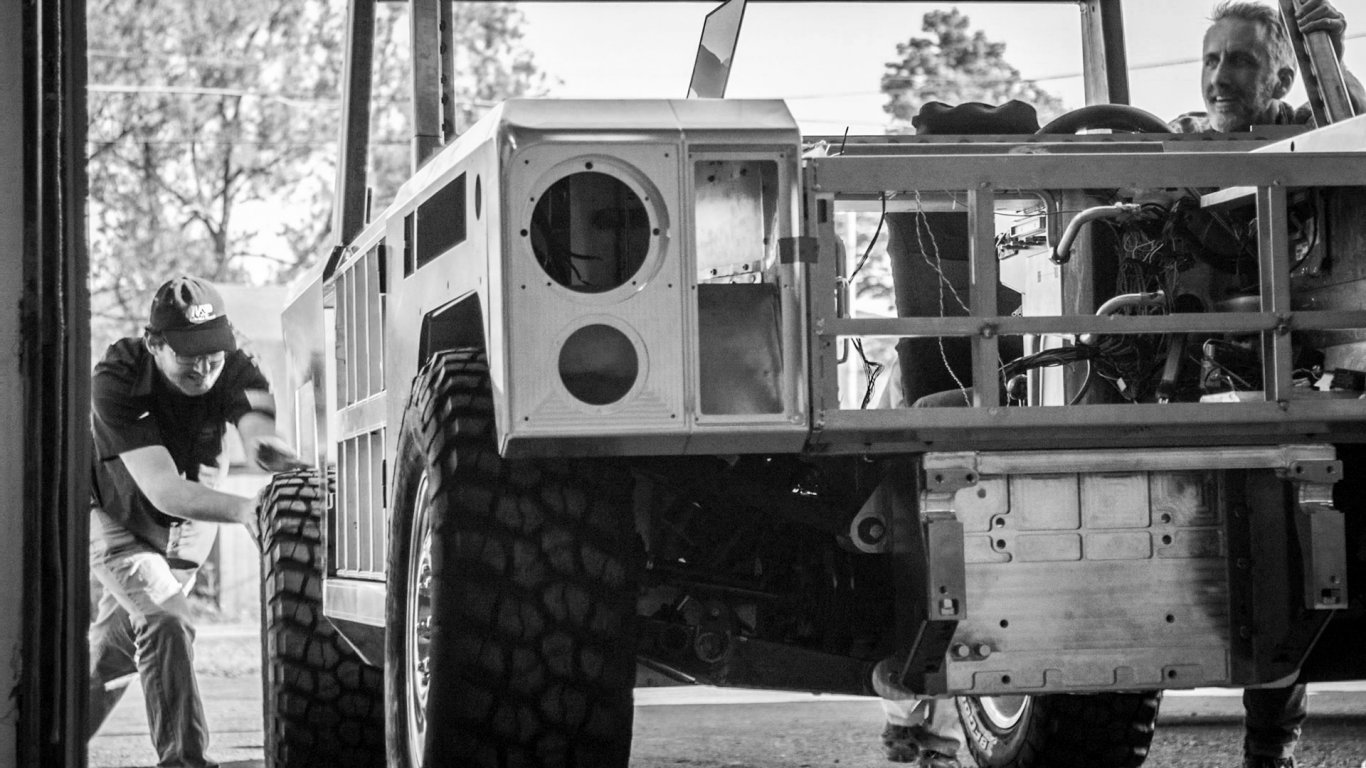 From Tesla shareholder to startup CEO: How Robert Bollinger is bringing utility to the EV market

On a rather chilly morning a few days before Christmas, Bollinger Motors CEO Robert Bollinger indulged my request for a short interview about his longtime support for electric vehicles. Speaking through FaceTime, Robert animatedly talked about Bollinger Motors’ highly anticipated Sports Utility Truck, his thoughts about other EV makers targeting the trucking segment, and even his experiences as a Tesla shareholder.

Robert Bollinger graduated from Carnegie Mellon University with a degree in Industrial Design. After working for a series of ad agencies, he started a 15-year stint at John Masters Organics, where he served as COO and CMO. Later on, Robert co-started a grass-fed cattle farm, and while working in the fields, he saw the need for a better truck — one that is not being made by the world’s premier carmakers.

Years before he started Bollinger Motors in 2014, Robert Bollinger found himself very impressed by a small startup electric car company from Silicon Valley. Having had a soft spot for EVs for years, his attention was immediately piqued by the release of the original Tesla Roadster and the Model S sedan. That said, his work on the fields meant that a sedan or a sports car did not really fit his needs. Nevertheless, he opted to support Tesla, just in another way.

“When Tesla first came out, when they had the Roadster and Model S, I was hoping to buy one. I didn’t have a car — I had my truck. (The Roadster and the Model S) never quite fit my particular needs, but I bought (TSLA) stock soon after they went public. Over the years, I just kept buying,” he said.

Being a shareholder of Tesla, Robert is all too familiar with the activities of the company’s critics, particularly those of short-sellers. When asked how he handled the stream of negativity consistently being thrown towards Tesla, Robert simply remarked that he “just kept buying.” Against the noise from the company’s most passionate naysayers, “I just kept riding it up,” he said. 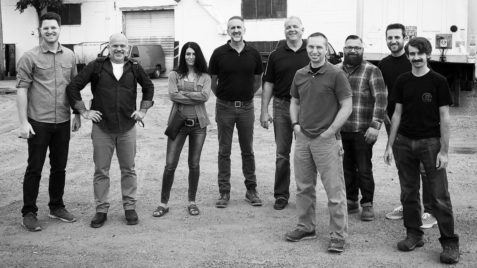 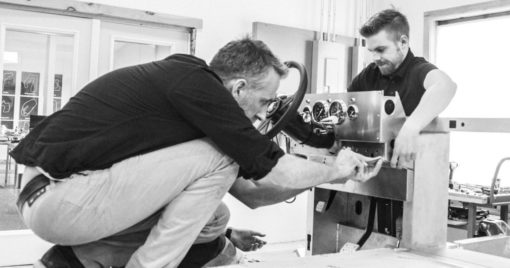 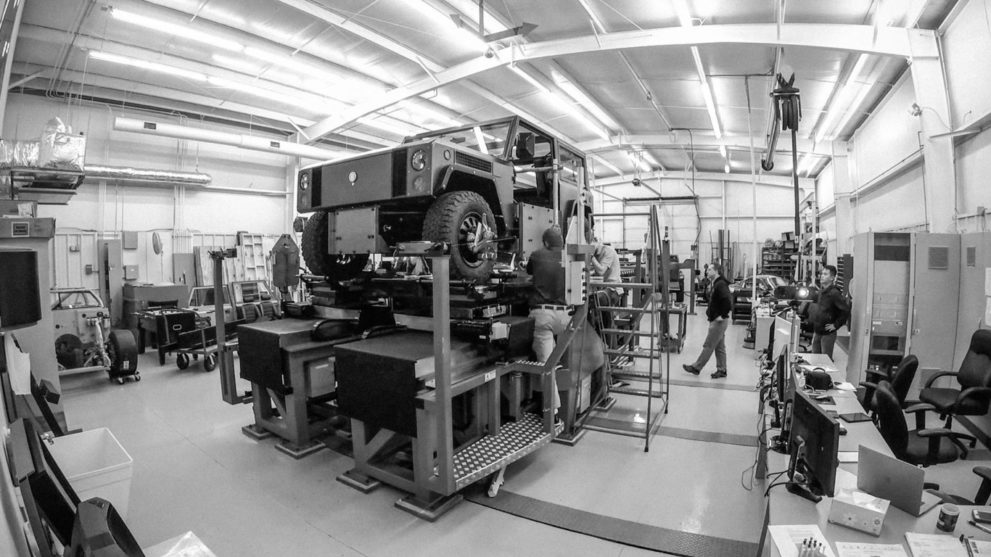 Robert Bollinger and his team with their first vehicle, the B1 Sports Utility Truck. (Photo: Bollinger Motors)

With Tesla disrupting the automotive industry, Robert decided in 2014 to start his electric vehicle startup. Operating under the name Bollinger Motors, the startup opted to create a vehicle that is designed and built around utility. It would be, in a lot of ways, the truck that Robert always wanted when working in the fields. It would be tough, it would operate in rough terrain, and most of all, it would be all-electric.

“I always believed in electric. If you want to start a startup now, it has to be electric.”

The result of Robert and his small team’s work is the Bollinger B1, a vehicle the company dubs as a “Sport Utility Truck.” The B1 is arguably the most utility-focused EV that has been unveiled so far, with its Land Rover Defender-esque panels, its 33-inch tires, and its 15-inch ground clearance. The interior of the B1 echoes the design of classic utility vehicles too, with analog gauges dominating the dashboard. The company is also planning the B2, a pickup truck it intends to unveil in the near future. Overall, Robert notes that the B1 and B2 are created to push the envelope on utility vehicles, particularly as SUVs and trucks nowadays are mostly focusing on factors such as luxury and comfort.

“Compared to sedans, SUVs and pickup trucks, they haven’t really evolved that much. They get more luxurious, but they never get drastically more capable. For example, their ground clearance generally has not improved. It’s not really until you go drastic such as going electric that you see how much you can do,” Robert said.

While the B1 has attracted a notable amount of interest since it was unveiled earlier this year (there are now around 28,000 reservations for the vehicle), other electric car companies are breaching the pickup truck market as well. Fellow EV startup Rivian, for one, recently unveiled the R1T pickup truck and the R1S SUV, and Elon Musk has mentioned on Twitter that he is “dying to make” Tesla’s pickup truck. Musk even noted that a prototype of the upcoming vehicle might be unveiled as early as next year. 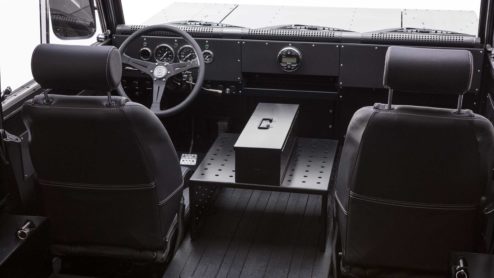 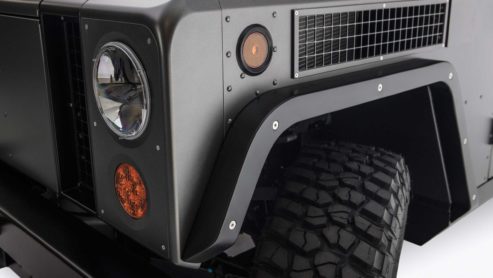 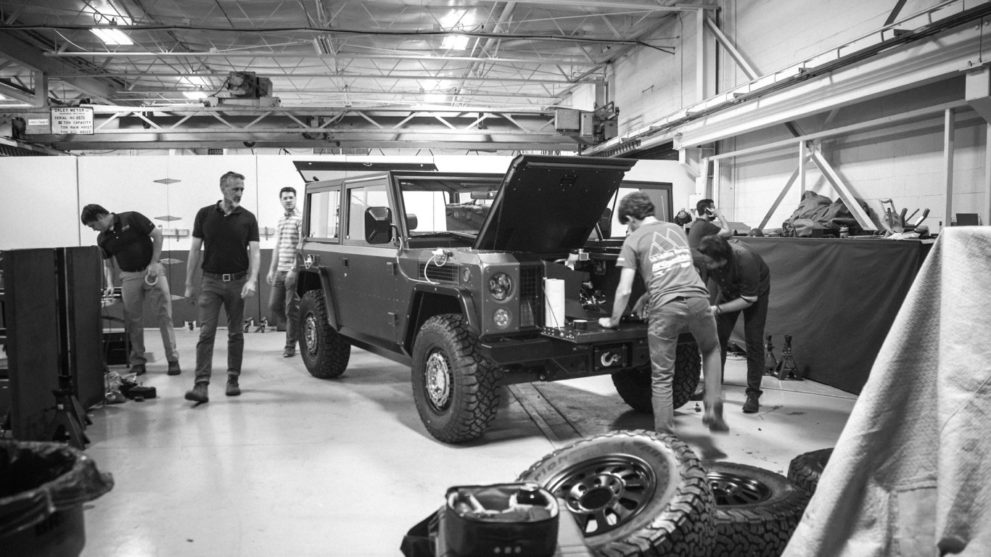 The Bollinger B1 is designed from the ground up as a utility vehicle. (Photo: Bollinger Motors)

Despite the emergence of pickup trucks and SUVs from larger, more established competitors, the Bollinger Motors CEO stated that he believes the market will be large enough for everyone. Even with legacy carmakers shifting their trucks to hybrids or all-electric vehicles, Robert believes that there will be consumers whose needs would be fulfilled perfectly by the B1 and the B2. In this light, the EV enthusiast notes that he welcomes the arrival of more electric and electrified trucks.

“At some point, there will be electric jeeps. There will be electric trucks from many carmakers. When we’re creating our own version of the vehicle, we have our own DNA; we have our own setup and specs. A lot of the legacy companies, when they finally come towards electric, they’re gonna have EV versions of what they have now. The first hybrid F-150 will have the existing architecture.

“Rivian’s extremely different than us. It’s more mainstream, more luxury — and that’s great. That’s their market, but it’s not ours. I’m sure when Tesla comes out with their pickup truck, it’ll be great. But we’re still going to be different. I’m just happy that there are more electric cars. I applaud them for doing a great job, and I believe that we can co-exist very nicely.”

One of these differences is in the way Bollinger is going about the manufacturing of the B1 and the B2. Tesla, for one, is developing and creating much of their vehicles’ components in-house. This, according to Robert, is strategic for Tesla considering the company’s size. For a much smaller startup like Bollinger, though, Robert noted that another approach was needed.

“Tesla and everybody else is going about things differently than we are. They raised hundreds of millions of dollars to acquire what they need. Whereas, we are more coming from the angle of hand-built, small team, low overhead. We’re growing from the handcrafted side of things if you will. We’re growing more organically, growing as we need to grow. We’re at a small space for prototyping right now because that’s what we need,” he said. 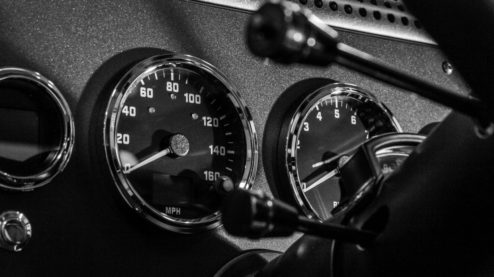 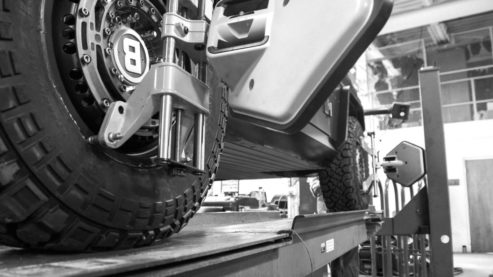 The Bollinger B1 echoes the design elements of classic off-road vehicles like the Land Rover Defender. (Photo: Bollinger Motors)

So far, Bollinger has moved to a larger headquarters in Detroit. Robert notes that this was a strategic decision since it allows the company to be close to vendors and a healthy talent pool. The B1 is also being refined as the company prepares to start producing the vehicle. When asked if he thinks Bollinger will experience its version of “production hell” once it begins manufacturing the B1, Robert candidly remarked that he is saving all the hell for 2019, when things will likely go really crazy.

With his background as a longtime EV supporter and TSLA shareholder, I asked Robert if he opted to use any of Tesla’s open-sourced patents when Bollinger Motors was developing the B1. The CEO notes that they didn’t find a need to tap into Tesla’s patents since Bollinger is not making its own electric motors or batteries. Due to the company’s size, Robert notes that he and his team are not trying to reinvent all the components of electric vehicles. Instead, it is more preferable for the company to rely on partnerships with vendors instead, particularly as there’s less overhead.

That said, the Bollinger B1 and Bollinger B2 do have similarities with Tesla’s Model 3 in terms of battery technology. Robert remarked that he and his team talked with about five battery providers to evaluate and test which types of cells would be best for the B1 and B2. After a long list that included pouch cells and prismatic cells from several manufacturers, Robert noted that they ultimately decided to settle on 2170 cells.

“Long list of battery scenarios, the 2170 cell just rose to the top. It just gave the most energy density,” he said. 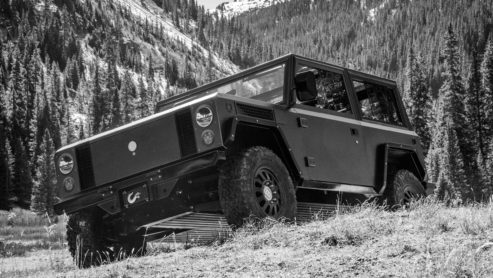 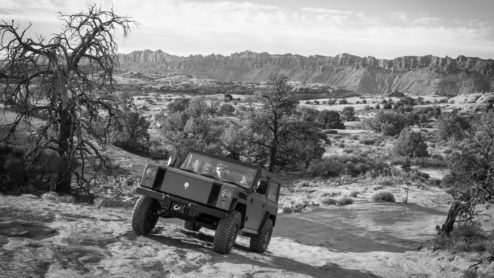 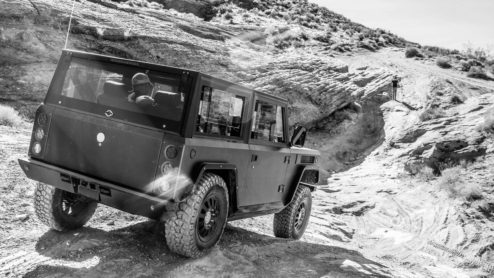 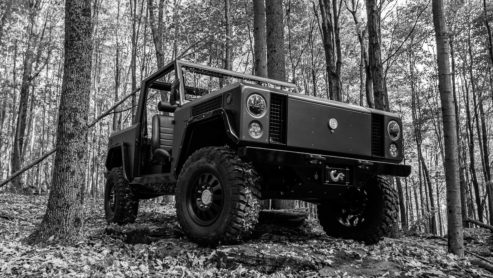 The Bollinger B1 in its natural habitat. (Photo: Bollinger Motors)

Just like Tesla’s electric cars, most of the Bollinger B1 and B2’s components are locally produced. Robert admits that there are critical components for his electric vehicles that are made elsewhere, but Bollinger is attempting to get them licensed for production in the United States. Once produced, Bollinger aims to bring its vehicles to customers across the globe. Robert noted that an RHD version of the B1 and B2 could be produced without much complexity too, thanks to the vehicles’ straightforward design.

The Bollinger B1 and B2 are equipped with J1772 and CCS ports. Back in August, and not long after Elon Musk mentioned that Tesla is not restricting other EV makers from accessing its charging infrastructure, Robert posted a tweet to Elon Musk, asking if Bollinger’s vehicles can use the Supercharger Network. The CEO noted that he didn’t really expect a response since he asked through social media, but as the B1 and B2 close in on production, there is a good chance that he might request Elon Musk for Supercharger access once more.

“I only asked them through a tweet, so I didn’t really expect a response. But as we finalize more things, we might come back to that. But we got so many people, Tesla fans, that were rooting for us. I appreciate that,” he said.

From Tesla shareholder to startup CEO: How Robert Bollinger is bringing utility to the EV market