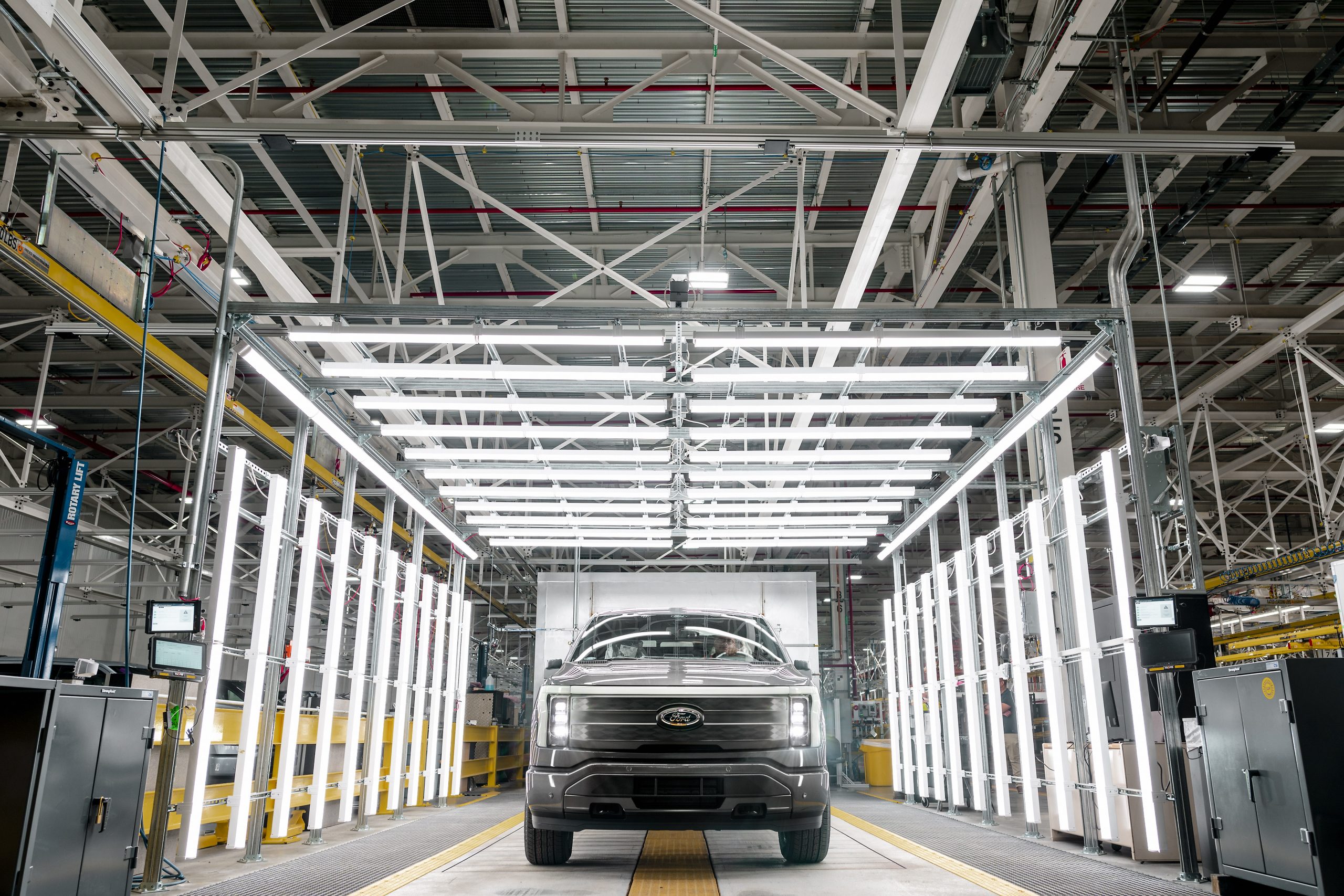 The manufacturing technology in the Rouge Electric Vehicle Center is just as innovative as the F-150 Lightning. It is the first Ford plant without traditional in-floor conveyor lines and instead uses robotic Autonomous Guided Vehicles to move F-150 Lightning trucks from workstation to station in the plant. Due to high demand, the current model year is no longer available for retail order. Contact your dealer for more information.

Ford CEO Jim Farley and other company executives were interviewed by Sandy Munro earlier this week, highlighting the work done on the F-150 Lightning, its defining features, as well as Ford’s future more generally.

Sandy Munro of Munro Associates runs a YouTube channel where he and his team dive into different models of vehicles and analyze their dependability, durability, and overall engineering design work. However, Sandy and fellow Munro associate Cory Steuben got to sit down with top leaders from Ford, which included Farley, Linda Zhang, who was the Chief Engineer of the all-electric pickup, and Doug Field, the automaker’s Chief Officer of EVs. Mainly focusing on the F-150 Lightning but also talking about the brand’s future and competitors, the interview culminated as Sandy asked the executive team about possible vertical integration within their manufacturing process, possible partnerships with Tesla, and a possible switch to the Tesla connector as the US default.

The video starts with Sandy getting the keys to his new F-150 Lightning, kindly delivered in person by Jim Farley and the team. However, Sandy quickly moves to ask about the truck and its design.

While Sandy was quick to praise the EV drivetrain and the durability of design, foremost thought the interview; the executive team focused on accessory features instead. Doug Field specifically sees the onboard generator, the large frunk, and the bi-directional power (the feature that allows the truck to power the home during a blackout) as the top reasons consumers have flocked to the new truck. Farley continues by noting that, while he didn’t expect the vehicle’s features to be such a crowd pleaser, he believes that they are the reason consumers aren’t asking “why an EV,” but “why not!”

The rest of the interview generally focuses on the market and the Ford brand. The biggest question is the thought of exponential growth in the EV market. Sandy notes explicitly that the US market had recently reached a 5% market share of EVs, what he calls a “tipping point” in the market. Jim responds positively, noting that he is excited about the chance to expand so quickly, expanding older plants such as “The Rouge” and constructing new plants like their new facility in Tennessee to meet demand. Further, he notes he isn’t worried about the brand’s ability to meet demand.

Another big question on the mind of Sandy (and many others who are interested in EVs) is the question of a partnership with Tesla, as well as the executives’ thoughts on the recent proposal to make the Tesla connector the new US standard. “We consider everything,” Doug responds tritely. The team responds to a Tesla partnership, saying that Ford would need a powerful motivating idea to consider abandoning their independence and partnering with another maker, Tesla or otherwise. However, none of the team concretely answered Sandy’s question about standardizing the Tesla Connector.

The group next addresses the possibility of increased verticle integration within their manufacturing. Software, batteries, and powertrain parts were essential parts where they stated the brand would likely continue to pursue verticle integration, going as far as to call other battery makers such as CATL “competitors.” However, Farley notes that he would not compromise the user experience in efforts of verticle integration.

Sandy concludes by lamenting the lack of the $20-$25,000 EV. He mentions that the in-demand Maverick is an excellent example of a vehicle that shows affordable vehicles can still do well and prove profitable for brands like Ford. Doug responds conservatively that, while they see the segment as “very important for global competitiveness,” difficulties remain in acquiring affordable powertrain parts and batteries. And while LFP batteries may offer an avenue into that market, Ford is still in the process of “considering other options.”

Sandy’s interview shows that Ford remains quite dedicated to pursuing EV tech and why they remain ahead of previous rivals such as GM and the Chrysler family of brands. Farley is thinking ahead of many of these other legacy brands, and despite the hurdles that come with that status (cough cough dealerships cough cough), they are positioning themselves well to succeed. Ford’s sales and stock price seem to reflect this.