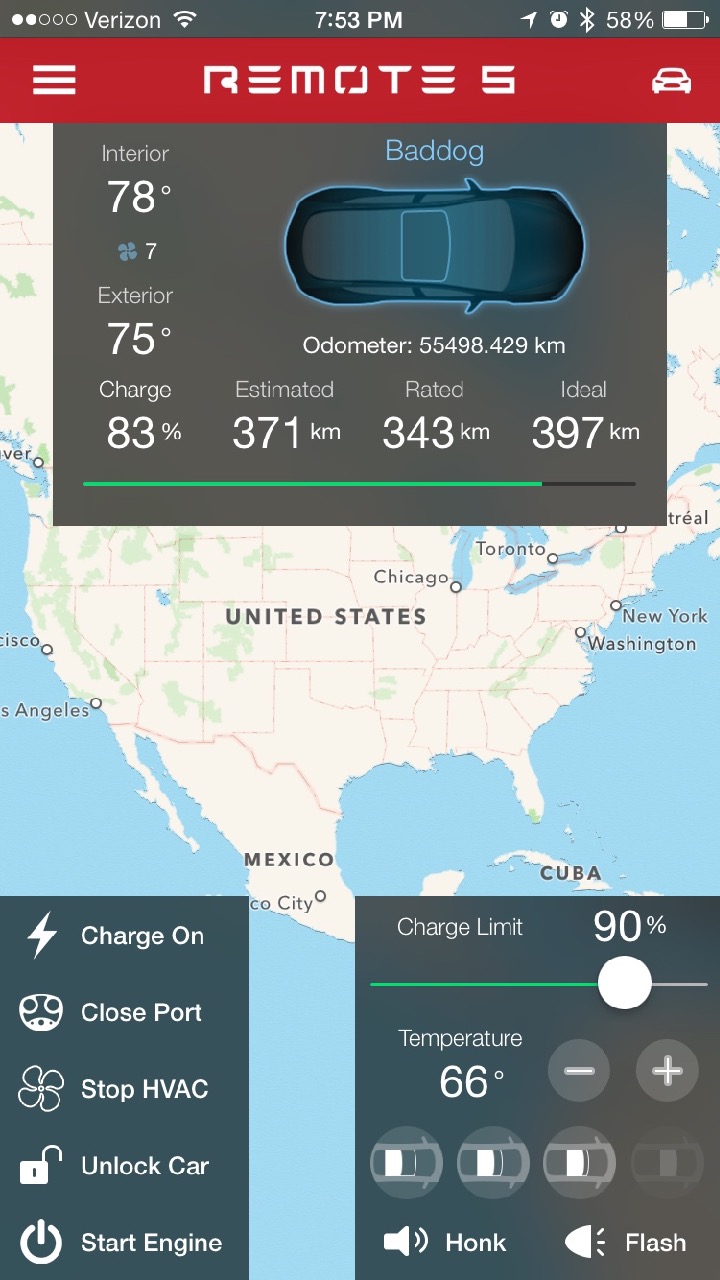 Tapping into the unofficial Tesla Motors application programming interface (API), Rego Apps has expanded upon the initial concept for an Tesla Apple Watch app with their very own iOS-based command center for the Model S.

I’m no stranger to being on top of the the latest gadgetry so naturally I had to take this app for a spin, on my brand new Apple Watch. Not to mention, there’s only so much fun that can be had when watching a digital representation of your heart rate pulsate on your wrist.

Here you get to set individual temperatures for driver and passenger. There's also a feature that allows one to turn on the Model S camper mode which isn't super earth shattering unless of course you frequently sleep/camp in your Model S, but it's still a pretty cool feature to have.

But the main draw for this app is really the Apple Watch component to it which I'll cover in the upcoming sections.

One thing any buyer of this app should beware of is the fact that it's built solely on top of the unofficial API for the Model S. Because of that, there's a risk that the app could suddenly stop working if for some reason Tesla Motors, one day (let's hope not), decided to remove or update the API. This would send vendors that rely on these APIs, such as Rego Apps, to scramble with an update in order to keep their apps running.

That said, I wouldn't worry too much since Tesla would need to make a heck of a lot of updates across TeslaMotors.com and on both the iOS and Android versions of its official apps if they decided to update or remove the API. Other apps such as VisibleTesla have also used this undocumented API (unofficially documented via the Tesla Motors Club forums) and have had mixed success with it. In some cases, Tesla has even disabled access to their API for certain repeat users causing big disruption to their app and user base.

Similar to Tesla's official app, the security model on Remote S is reasonably secure -- the app asks you for your "MyTesla" login information which it then uses to register a persistent token (cookie). This allows you to run the app without having to login again on all future sessions. If you decide to change your password at MyTesla, you'd then have to re-login at the app with these new credentials. The app doesn't send your password to the vendor or anywhere else, it just logs you in so it can do its work. There are some notes in the forums about the security of the SSL certificate being used and how to strengthen it, and if you're at all concerned about security then you should stick with the official app.

The Apple Watch portion of the app puts all of the Remote S controls directly onto your wrist. You can lock/unlock your car, honk your horn, start the car, turn on the A/C, and the list goes on. The interface is clean and well done. It shares some of the same minor issues as found on the iOS app, but I hear those wrinkles will be ironed out in an update that's coming soon.

Like the iOS app, state changes made through the app can take some time before its reflected back on the screen. Also like the iOS version of the app, it can do things the official Tesla Motors app can't do such as open your sunroof.

I think the best way to really show the capabilities of Remote S is by putting together a collage of the screens. Here's a list of the screens that I'm seeing directly through my Apple Watch: The screens with the action icons, like "Start Car", pop up when you force touch (press hard) on the Apple Watch display. Be careful as pressing the icons do not prompt you with a confirmation so you could easily turn on your A/C, unlock you car and other fun stuff if you're not careful. Both the iOS and Apple Watch version of the app worked as expected, but not only that, I found it to be reliable in all my testing. For a 1.0 version this is quite an impressive accomplishment.

The developer does not, yet, offer an Android or Pebble watch flavor of the app, but given how incredibly responsive he is on TMC, it wouldn't be too far fetched to ask him to port the app over to other platforms.

As the app gains wider adoption, Rego Apps will be able to invest more resources into updates and expansion into other platforms. I love to see independent people rapidly iterating on improvements to the relatively static Tesla Motors app.

Do you need the Remote S app? Probably not. But the "wow factor" of controlling your car from your wrist is pretty cool assuming you're okay with forking over $10 for a third party.