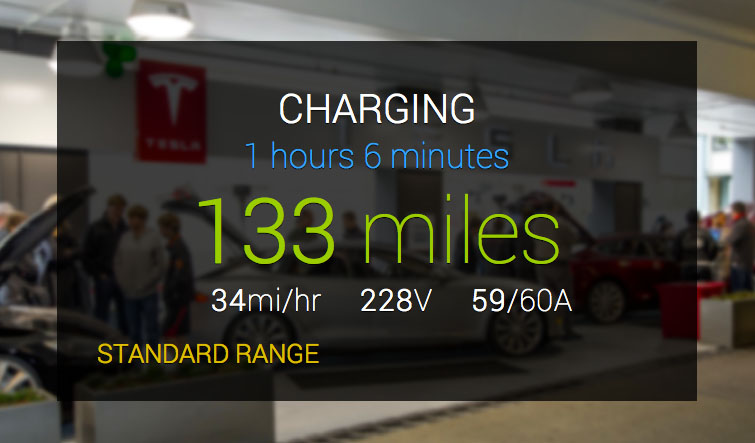 Tesla Model S owners and Google Glass Explorers. Two circles of a Venn diagram that likely don’t overlap. Much. But that hasn’t stopped Sahas Katta from developing an app for Glass that gives Tesla owners some basic control over their all-electric sled.

Katta had access to a Model S owned by a family member and reverse-engineered the official Tesla app for Android to run on Google Glass.

That means the functionality is limited to what Tesla baked into its original app, but it’s a solid start.

Katta’s Glass app allows users to view the amount of juice and charging status, remotely start and stop charging, and pop open the charge port. Locking and unlocking the doors is also included, as well as being able to honk the horn and flash the lights.

More useful is the ability to see the interior and exterior temperatures and then set the auto climate system to heat or cool the inside before the owner returns. And since the app relies on the built-in GPS of both the smartphone and the car, it can help owners find their Model S in a crowded parking lot. (Not that the Model S is that ubiquitous to begin with, unless you live in the Bay Area).

But again, the functionality is limited to what was included in the original Tesla Android app. But Katta has plans to expand, with voice controls to, say, open the trunk or lock the doors, get a push notification when the Model S completes charging, and even incorporate some kind of head-up display.

If you’re one of the few owners of both Glass and a Model S, you can download the app now, and expect more functionality when Google releases more developer tools — assuming Tesla doesn’t shut down Katta in the meantime.