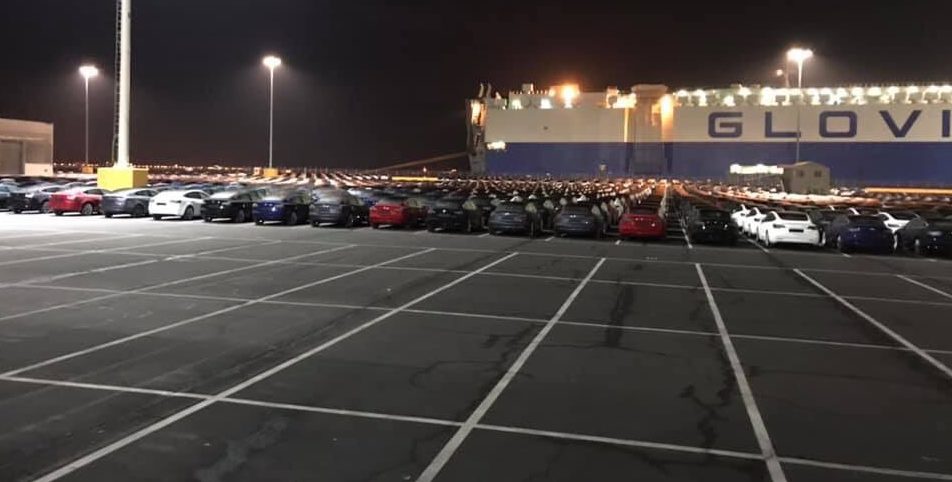 The arrival of the cargo ship Glovis Captain on the port of Zeebrugge earlier this week heralded new opportunities and challenges for electric car maker Tesla. The massive vessel is estimated to be carrying around 3,000 Model 3, which are expected to start an electric disruption in Europe’s passenger car market. At the same time, the arrival of the highly-anticipated sedan also means that deliveries to reservation holders in the region are about to begin.

In true Tesla fashion, plans were underway to get the recently-arrived Model 3 to customers as quickly as possible. Thus, instead of taking a while before starting handovers to reservation holders in the region, Tesla immediately went to work. Reports from the Tesla community even indicated that they received messages from the carmaker indicating that they could pick up their Model 3 starting Wednesday at the company’s Tilburg facility, shortly after the cars arrived on Zeebrugge.

Soon, social media posts from the Tesla community revealed that the first Model 3 deliveries in Europe were already underway. That said, it did not take long before Tesla became unable to deliver as many vehicles as they estimated. Some reservation holders even went so far as to state that they were advised to pick up their Model 3 the following day. While an additional day is but a drop in the bucket compared to the nearly three-year wait for the electric sedan experienced by reservation holders, Tesla’s inability to deliver as many vehicles as it expected became a great inconvenience nonetheless.

On Wednesday, Elon Musk took to Twitter to apologize for the delivery delay in Europe. In a tweet, Musk explained that Tesla met some “unexpected challenges” with the vehicles coming through the Belgian port. Nevertheless, Musk noted that Model 3 deliveries should start moving on Thursday.

Sorry, many unexpected challenges with cars coming through Zeebrugge first time. Cars will start moving out in volume tomorrow.

Ultimately, this is yet another case of Tesla miscalculating and shooting itself in the foot in the process. In the case of Europe’s first Model 3 deliveries, reservation holders were expecting their vehicles at a later date to begin with (the reservation holder Musk responded to on Twitter, for example, had a delivery date of 02/16/2019). The earlier delivery estimates, and the succeeding failure to meet said estimates, all transpired under Tesla’s own doing.

That said, Tesla’s journey with the Model 3 to date hints at something positive following the company’s logistics challenges in Europe, considering that the electric car maker faced the same issues in the US last September. During that time, Tesla was just hitting its stride with the production of the electric sedan. Tesla was also going for profitability, which required a record number of vehicle deliveries. Tesla’s deliveries became so backlogged that reservation holders saw their handover dates rescheduled multiple times.

Just like Elon Musk’s recent tweet, the Tesla CEO owned up to Tesla’s challenges then, explaining that the company had gone straight from “production hell” to “delivery logistics hell.” Musk also mentioned later that challenges in logistics are easier to solve than production issues. True to the CEO’s word, Tesla delivered a record number of vehicles in the third quarter, with Q3 2018 handovers totaling 83,500 vehicles including 55,840 Model 3. Ultimately, these deliveries helped the company achieve its first definitively profitable quarter in years. These logistics challenges were completely absent in Q4 2018 as well, when Tesla delivered a total of 90,700 vehicles, including 63,150 Model 3.

With this in mind, it appears that Tesla’s current challenges in delivering the Model 3 to European customers are something that the company can handle. Tesla’s experience in the United States alone should help the electric car maker gain enough footing to conduct handovers in the region in a manner that is smooth, convenient, and well worth the nearly three-year wait for Model 3 reservation holders.

While Tesla appears to have miscalculated its initial European Model 3 deliveries, the company is in a constant effort to improve its logistics. Elon Musk took particular notice of this issue in the recently held Q4 2018 earnings call, when he was discussing the probability of Q1 2019’s profitability.

“We’re going to get cars to China and Europe and make sure that we have good logistics for the whole delivery process, from factory gate to the customer. That’s obviously pretty far from California to get to Europe and China and make it to, again, our two customers. So, we’re working every aspect of that logistics chain. And I think we’ve — I think it’s going to be good. I would say at this point; I’m optimistic about being profitable in Q1. Not by a lot, but I’m optimistic about being profitable in Q1 and for all quarters going forward,” Musk said.

For the meantime, the beast that is the Tesla Model 3 is still waiting for its chance to fully saturate the European market.