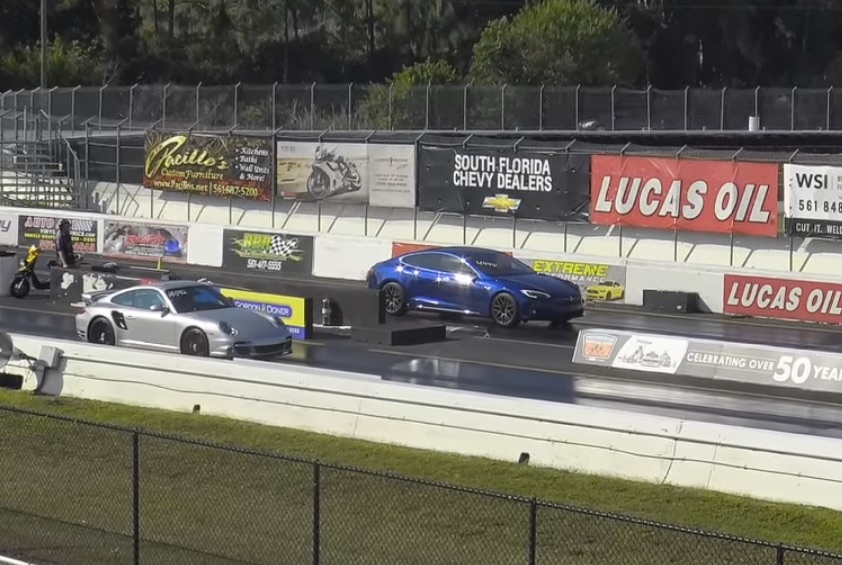 It’s a story we’ve seen time and time again. Tesla takes on big horsepower sports car in a drag race. Tesla slingshots itself to victory. But what happens when the opponent is one of the most recognized performance cars in history; a car capable of record-setting Nürburgring lap times and ripping through a 1/4 mile in 10 seconds directly from the factory?

A new video has surfaced on YouTube showing Tesla’s mighty P100D staged against a 2011 Porsche 911 Turbo S in a heads up drag race. Outfitted with a larger intercooler, upgraded air intake system, exhaust and tuned ECU, the Porsche Turbo seen in the video is said to produce 600 hp with 600 ft/lbs of torque. Matched against Tesla’s dual motor P100D, which packs 259 hp from the front motor and 503 hp at the rear, and we might just have the recipe for the perfect drag race.

A new over-the-air software update slated for December will unlock even more performance from the P100D via an easter egg. Tesla CEO Elon Musk revealed on Twitter that performance figures for its flagship Model S P100D are expected to be in the range of 2.4 seconds for 0-60 mph and 10.6 seconds for the 1/4 mile.