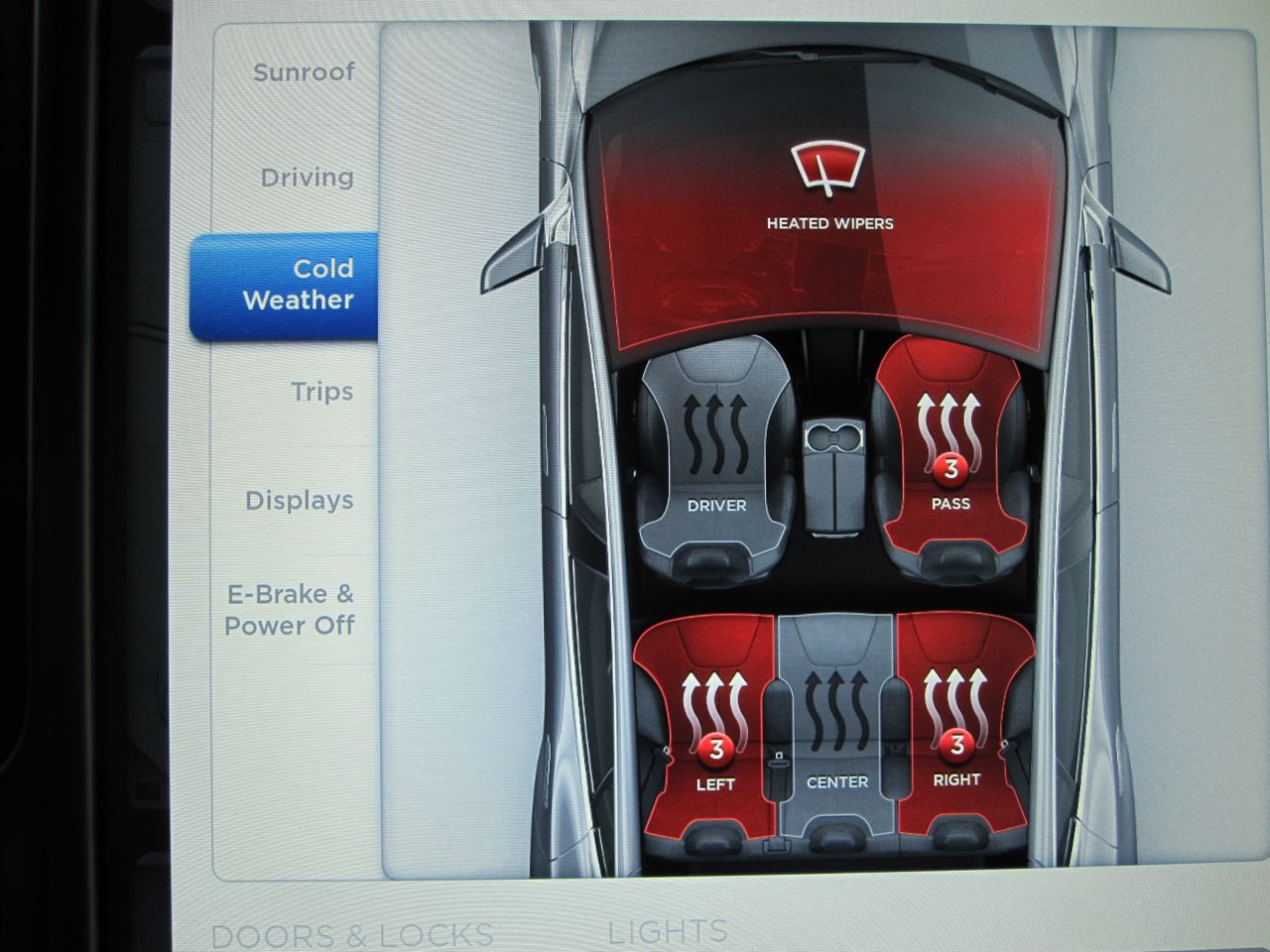 On July 4th the family and I decided to embark on a road trip to Rockport, MA which is 180 miles round trip from home. This post isn’t about the amazing range of the Model S but rather how the Subzero Weather package kept complaints to a minimum, but more importantly saved me some money. The Subzero weather package is a $750 option that can only be added at the time of purchase. I haven’t heard of anyone being able to retrofit the option afterwards. The Tesla site shows a car driving in the snow as the marketing teaser for the weather package, but it actually has very little to do with driving in the snow. The alternate picture shows a better representation of what you get – heaters.

Tesla calls it “Cold Weather” on the touchscreen controls but the package is marketed as the “Subzero Weather Package”.

With the Subzero Weather package you get three additional controls as follows:

The main reason I bought the Subzero Weather package is that I live in New England and anything that can help with the winters is worth it! But seriously, my family loves seat heaters. My wife never drives without a seat heater turned on in order to help with her back issues.

The Model S takes seat heaters to a new level by providing three seat heater positions for the rear. Each one can be controlled independently of one another and can be adjusted from a heat setting of 1 – 3. From the off position, tap once to go to level 3, then tap again to go to 2 etc. One suggestion that would be a nice-to-have, and a relatively easy change through a firmware update, is if they provided a quick “off” ability. I’m always doing extra tapping to go from 3 to off. A long press maybe?

ALSO SEE: How Does a Tesla Over-the-Air Software Update Work?

When I first took delivery of the Model S, only 1 of my 5 seat heaters worked. A reboot fixed that and they’ve been fine since. The seat heaters work amazingly well and it’s no wonder that Tesla recommends using them to deliver heat versus cranking up the cabin temperature as it’s a much more efficient method of getting warm.

Other than the quick “off” ability I’d like to also see these cold weather elements controllable from the app so I could warm my seat as well as my cabin before entering.

Another annoyance is that Tesla, in their minimalist no-buttons approach, decided not to provide the rear passengers control over, well, their rear. This means as the driver I get the constant requests to raise or lower the temperature on various rear seat positions (my co-pilot hasn’t been brave enough to touch the screen yet herself). Short of adding switches in the rear of the cabin (unlikely for Tesla, and not happening with just a software update), I don’t see this one getting addressed. They may want to consider how minimal their approach is in the Model X. SUV rear seaters expect control! So, back to why I’m writing this in July. The outing was great and Rockport, MA is beautiful, but in traditional New England form, right after the “Lobsta” rolls, it clouded over, dropped to 65 and rained all over us. I had my handy one-person umbrella stuffed in my glove box but otherwise we were unprepared. After an hour of shopping in the rain and holding off on expensive sweatshirt purchases, the seat heaters earned their keep. All five were blazing on the way home as we were drying and warming up.

Seat heaters are not just for the winter months and can help loosen up a stiff back, take some boredom out of a long drive, and warm you up when you’re physically or mentally cold. The other two options that come with the Tesla Model S Subzero Weather package are related to your windshield. What Tesla calls “Wiper blade defrosters” is a set of heating elements that are part of your lower windshield designed to warm up your wiper blades and prevent them from freezing onto the windshield. They’re also supposed to help remove ice from the wiper blades but I’ve heard mixed reviews on its effectiveness. The heating elements are controlled by touching the dash area. Like the seat heaters, this is not controllable from the mobile app, but having it would allow you to defrost the wipers long before arriving at your frozen car. Also, it’s important to note that these heating elements automatically turn off after a period of time so you may need to periodically turn them back on if you still need them to do some work.

I never noticed it until just now as I was taking pictures for this post, but did you ever notice that the Model S frunk has no washer fluid dispensers to detract from its beauty? It turns out they’re tucked under the edge of the frunk by the windshield. This placement will make them less prone to being covered by ice and snow build up. The third option that comes with the Tesla Model S Subzero Weather package is a heating element to keep wipers free of snow and ice.By all reports it does a pretty good job at it.