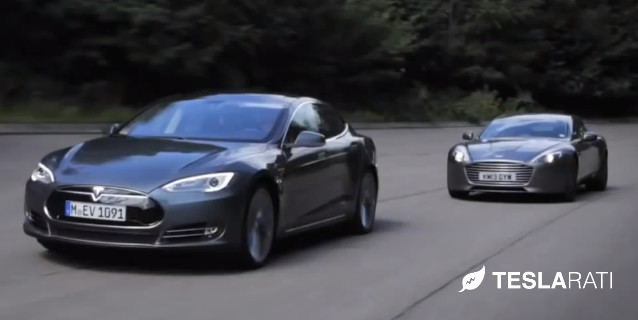 I think I must have seen countless drag races between the Tesla Model S and its various victims by now, but the latest shootout against the Aston Martin Rapide S is one that  took me completely by surprise.

The host of UK’s Autocar recently did a segment on how revolutionary the Tesla Model S … surprise, surprise.   Yes, we know there’s a huge IPAD like center console and yes we know the huge 2 tons car is equally balanced due to the massive battery that’s part chassis.  But what we didn’t know is that the Tesla Model S can out accelerate a 550-hp 5.9-liter V-12 Aston Martin Rapide S!

The Rapide is a refined sculpture – a pure work of art, with an aggressively raked windshield which makes it nearly impossible to see anything above the roof line.  The Model S on the other hand is equally as refined, just as sleek, minimalistic, and carries design queues similar to that of the Aston, but curves with a much gentler touch.  Given the fact that Tesla Motors recently hired Aston Martin’s Chief Vehicle Engineer, one thing for sure is that the next generation of Teslas will be even more striking in many more ways than one.

Anyhow, on with the video.  Enjoy!