While The Boring Company is hard at work preparing for the upcoming public showing of its proof-of-concept tunnel in Hawthorne, CA on December 10, the tunneling startup also appears to be laying the foundations for its high-profile transport project in Chicago. The project, which would connect downtown Chicago to O’Hare airport, is expected to break ground within the next few months.

The contract for the Chicago-O’Hare transport line had several key bidders, including veteran conglomerates with decades of experience in building transportation systems. Quite surprisingly, Chicago awarded the contract for the project to the young tunneling startup, partly due to The Boring Company’s commitment to funding the tunnel system through private investors. In true Elon Musk fashion, the timeline for the Chicago tunnels is aggressive, with the startup aiming to have the high-speed systems operational in 18-24 months after the initial digging.

The Boring Company has issued few updates on the Chicago project since it won the contract last June. Save for an image of a tunnel boring machine gantry that was shared on Twitter; the tunneling startup has been quite silent about the progress of its preparations for the high-profile project. Earlier this month, though, Teslarati photographers Pauline Acalin and Tom Cross were able to snap more images of the TBM gantry being built for the Chicago transport line. What’s more, sophisticated equipment in the same site also suggests that a large machine — possibly The Boring Company’s new TBM — is under construction. 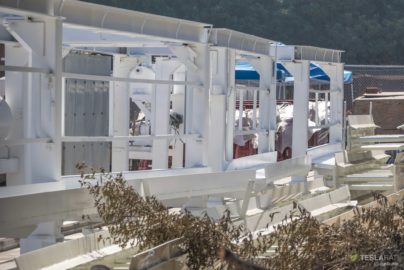 The Boring Company’s site for the assembly of its TBM gantry and its next-generation boring machine. [Credit: Pauline Acalin/Teslarati]

The Boring Company’s site for the assembly of its TBM gantry and its next-generation boring machine. [Credit: Pauline Acalin/Teslarati]

The Boring Company’s construction site for its gantry and TBM. [Credit: Pauline Acalin/Teslarati]

During the Boring Company’s information session earlier this year, Elon Musk described the design of the startup’s tunnel boring machines. According to Musk, Godot, the company’s first TBM, is a conventional tunneling machine. Line-Storm, which was announced by Musk on Twitter last October, would be a hybrid, with parts from conventional boring machines and custom hardware designed by the company. Thanks to its hybrid nature, Line-Storm would be 2x faster than Godot. Proof-Rock, a third-generation TBM, will be developed entirely by the Boring Company, and it would be 10-15x faster than conventional TBMs.

It remains to be seen if the machine seemingly being assembled at the Hawthorne site is Line-Storm or Proof-Rock. That said, the Boring Company’s TBM for Chicago would most likely feature the startup’s most advanced tunneling tech yet. During the information session, Musk stated that the company’s boring machines, thanks to their electric nature (or partially-partially electric in the case of Line-Storm), the Boring Co’s machines are around 3x more powerful than conventional TBMs. The TBMs will be powered by Tesla batteries as well, eliminating the need for cabling in the actual tunneling site. 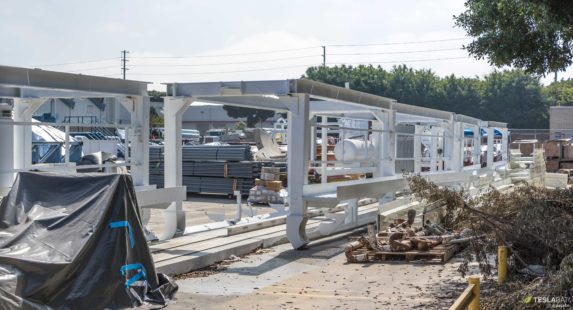 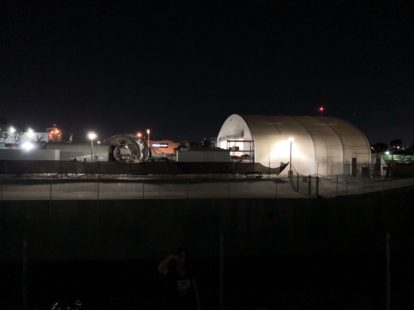 The Boring Company’s construction site for its gantry and TBM. [Credit: Tom Cross/Teslarati] 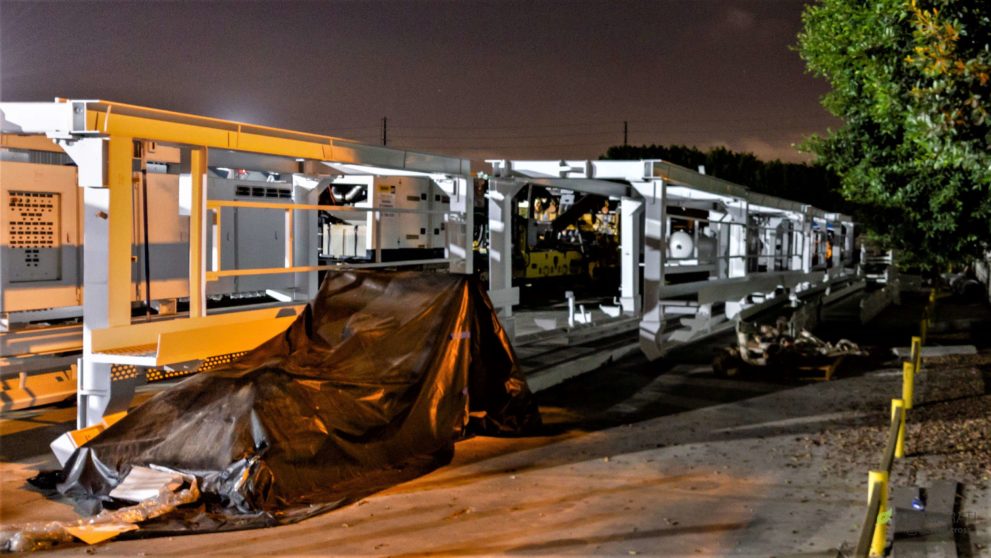 The Boring Company’s construction site for its gantry and TBM. [Credit: Pauline Acalin and Tom Cross/Teslarati]

The Chicago-O’Hare line is the Boring Company’s most ambitious project to date, estimated to be more than 17 miles long and costing around $1 billion when it’s complete. The transport line would feature the Loop System, which utilizes electric pods designed to transport up to 16 commuters at a time. The pods, which would be constructed by Tesla Inc., are all-electric, and are capable of traveling up to 150 mph. Seemingly as a means to make the manufacturing of the Urban Loop pods quicker and more efficient, Tesla would be using the Model X chassis as a basis for the vehicles.

Apart from the work being done on the Chicago TBM gantry, as well as the apparent assembly of its next tunnel boring machine, The Boring Company is also hard at work in completing its Hawthorne tunnel, which is set for public showing this coming December 10. A prototype garage-elevator concept that connects directly to the Hawthorne test tunnels is also being built on a private lot at 120th Street and Prairie Avenue, roughly halfway in the company’s 2-mile Hawthorne test tunnel.