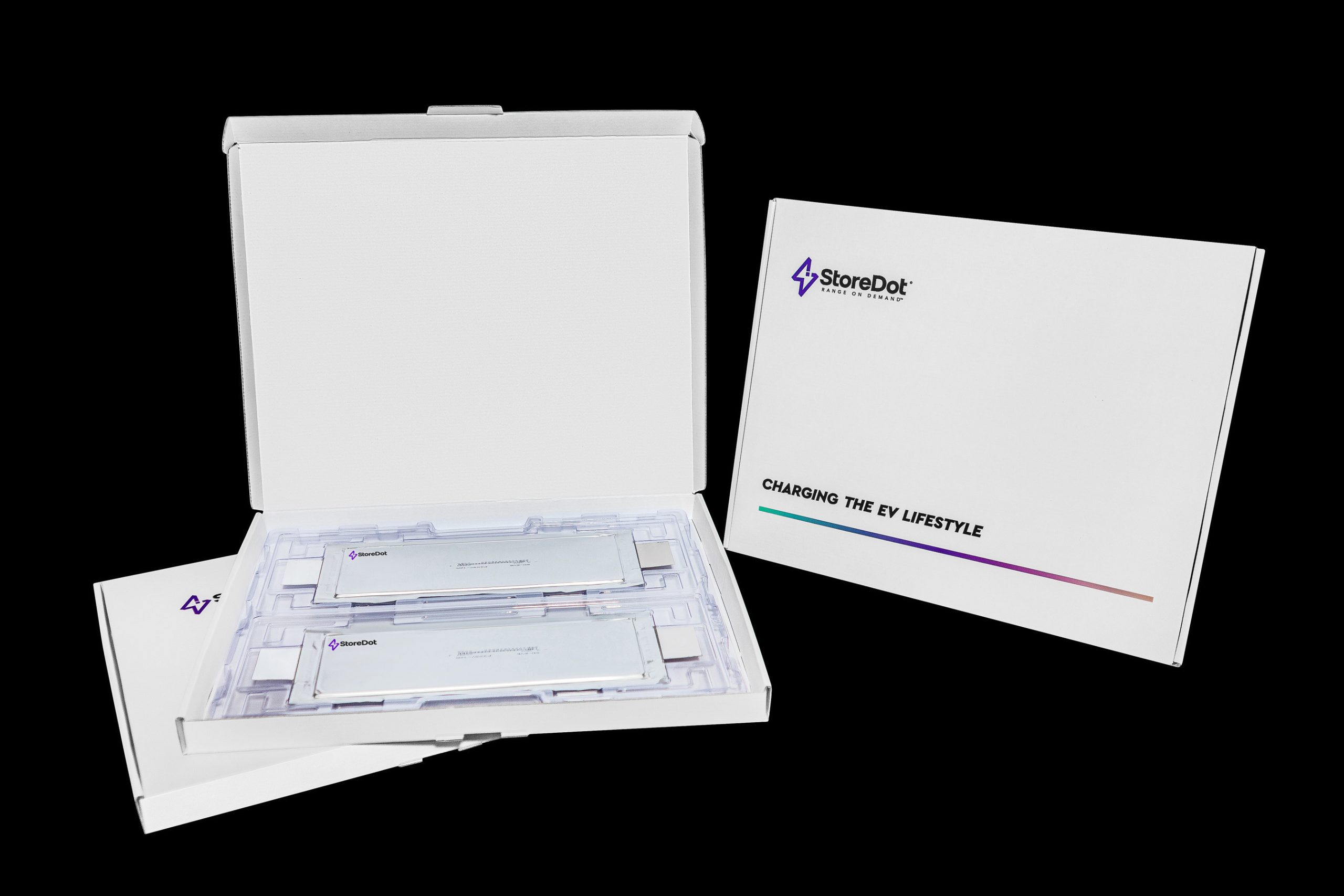 StoreDot said it commenced the shipment of the EV cell samples to Daimler, VinFast, Volvo, Polestar, and Ola Electric, all of which have invested in the cell company. The “100in5” battery technology will be mass-produced in 2024, StoreDot says, following another successful Series D funding round that occurred earlier this year.

In May, StoreDot demonstrated how its new “100in5” pouch cell could be utilized for “extreme-fast” charging solutions in electric vehicles. The demonstration featured StoreDot’s 300-millimeter by 100-millimeter pouch cell. The cell was charged to capacity in under ten minutes, which was the time limit for the presentation.

The cell maintained a charge rate capable of providing 100 miles of driving range every five minutes it charges. The battery did not overheat and never exceeded 33 degrees Celcius, or 91.4 degrees Fahrenheit. StoreDot maintains this is well below the company’s recommended operating temperatures.

In June, StoreDot completed another demonstration of the “100in5” cell at the International Electric Vehicle Symposium in Oslo, Norway.

Since the demonstrations, StoreDot has accumulated more funding through its Investment Rounds and has continued to develop and build more prototypes of the “100in5” cell, preparing to ship them to manufacturers. The cell samples are now on their way to various OEMs in the EV industry after being manufactured at StoreDot’s long-standing manufacturing partner in China, EVE Energy.

“I am delighted that we have now commenced intensive, real-world testing with leading OEMs and am confident that our cells will exceed OEM expectations with respect to energy density and extreme fast charging. Current performance shows >900 consecutive extreme fast charging (10% to 80%) in just 10 minutes, with more than 300 Wh/kg. We are on track to exceed our commercialization milestone of 1000 cycles this year. With the support and collaboration with key partners, StoreDot plans to begin mass production of our ‘100in5’ cells and provide 100 miles of range for 5 minutes of charging during 2024. Our journey will not end there, as we confidently continue with our strategic goal of providing 100 miles of range with just 3 minutes in 2028, and in 2 minutes of charging within a decade.”

Fast-charging battery cells are one of the biggest focuses in the EV sector, as diminishing long wait times for electric vehicle charging has been a need from consumers. While some companies have adapted various entertainment techniques to keep EV owners occupied while their vehicles obtain range, cell manufacturers are attempting to develop sustainable and effective fast-charging batteries that will revolutionize charging as car owners know it.