With the Lucid Air Dream Edition finally beginning initial deliveries more than a year after its unveiling, the automaker’s first builds are showing an impressive build quality thanks to Lucid’s focus on fine craftsmanship. A spacious, luxury interior also fills the inside of the Air Dream Edition, giving the impression that first owners are more than happy with what they have been given after a lengthy wait.

Vivianna Van Deerlin was one of the first owners of the Lucid Air Dream Edition and attended the October 30th, 2021 unveiling event in California. While Van Deerling attended the West Coast-located ceremony, which included breakfast, numerous speeches from Lucid executives, and a trunk full of Lucid-inspired goodies, she is a resident of New Jersey, and putting 3,000 miles on the car in the first few days was not what she planned for. The vehicle was then shipped to New Jersey, where she plans to take delivery soon.

However, a video Van Deerlin took at the Lucid Delivery Event in California showed the impressive build quality the Air sports in its early builds, and it may be the reason the car was awarded MotorTrend’s “Car of the Year” award. Lucid has already detailed that the first few units of the Air would be built by hand. In March, Lucid detailed the tedious-but-necessary process of taking out automation and bringing humans in to build the cars. It eliminates the uncertainty of mass production, and while fewer units can be built, quality is unmatched. “At this stage in the process, it’s less about the robots and more about the hands-on human element. It’s all carefully choreographed,” Lucid wrote in its blog. “We do have some robots and we do have automation, but this vehicle is put together by humans. And it takes real craftsmanship,” Art Schlaud, Director of Manufacturing for General Assembly said.

If the Air Dream Edition delivery event told us anything, it’s that Lucid is bringing its finest vehicles to the forefront during its shiny-and-pretty delivery event. The cars are nearly flawless, and the exterior is almost as pretty as the interior. 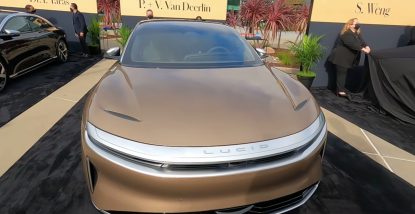 Van Deerlin may be one of the most qualified people on Earth to give a first impression of an EV. In 2009, Van Deerlin was a Model S reservation holder, and took delivery of an S85 in December 2012, she said. There was no infrastructure, Superchargers were not a thing, and electrification was far away from the mainstream. “It was a gamble at the time, but we believed firmly in the mission to transition the world to sustainable energy, so were excited to be early adopters of Tesla and help spread the word,” Van Deerlin said.

Lucid’s competitive nature, which has included plenty of mention of rival Tesla, does not make anything different for Van Deerlin. “This purchase of a Lucid Air in no way diminishes my passion for my Tesla vehicles, energy products and the Tesla community. I love our Model 3, Model S, and Roadster. For anyone who truly believes in the Tesla mission, and not just making money from Tesla stock, the success of more than one EV company is imperative. I see a future of transition to electric vehicles — but I do not see a future where everyone drives a Tesla,” she said on YouTube.

Build quality is a term that many Tesla enthusiasts are familiar with because it was a strong point of conversation for media for some time. Tesla was struggling with build quality when ramping up the Model 3 several years ago, after having the reputation of well-built cars with early adaptations of the Model S being handbuilt. CEO Elon Musk has always said that “production is hard,” and Lucid may get to experience that lesson in a few years when it begins to mass-produce the Air sedan or the “Project Gravity” SUV it will unveil. The real question is whether Lucid will be able to keep this impressive build quality up while it begins to scale its manufacturing processes. Past experiences have taught us that automakers tend to struggle with perfect build quality while balancing thousands of units per day.

Nevertheless, Lucid brought its A-game for its first impressions. Check out Van Deerlin’s video on the delivery experience below.